Are Chinese Stocks Really a Bargain?

Chinese stocks are the bargain of a lifetime. That’s what pundits from Goldman Sachs to analysts at major media outlets have been reporting. Are they right?

The resurgence of borrowing money, led by world governments, has pushed global debt levels up 40% from $70 trillion in 2007 to around $100 trillion today. And while the bull market in debt has been fueled by government spending, corporations both private and public have joined the party. Although it may not seem like it’s relevant to Chinese equities, it is.

Where is corporate debt at most alarming levels? Look no further than the Asia Pacific (NYSEARCA:VPL) basin.

Corporate debt as a percentage of GDP in China now exceeds other countries with high debt-to-GDP levels like Singapore (133%) (NYSEARCA:EWS), Malaysia (116%) (NYSEARCA:EWM), and the United Kingdom (115%). According to some estimates, China’s corporate debt last year hit  record levels near $12 trillion.

Overleveraged corporate balance sheets in China (NYSEARCA:FXI) is a big problem. But nobody knows exactly how big. That’s because a lack of financial transparency is a hallmark of how Chinese enterprises along with the People’s Bank of China operate. In fact, their opacity is so great, China’s regulators don’t even know the true extent of systematic risks facing their nation. Opacity is an investor’s worst nightmare. 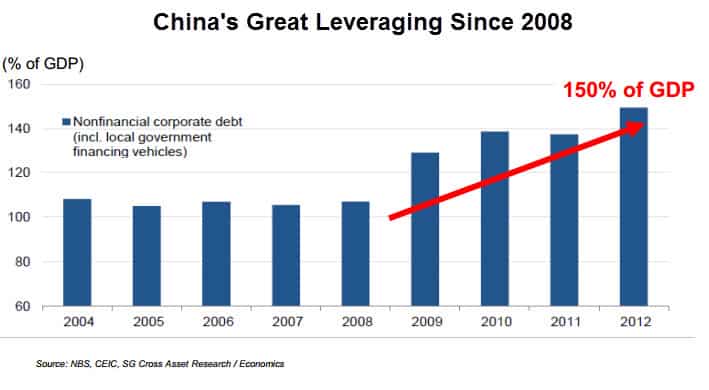 Contrary to the bullish picture pundits have painted, my latest ETF investing video about China exposes the propaganda and misinformation about Chinese markets (NYSEARCA:YANG). Saying that China’s financial crisis is over when it hasn’t even started is misleading. I also reveal the ETF ticker of an inverse performing China ETF designed to increase in value when Chinese stocks fall that gained 23% from our Dec. 6, 2013 buy alert, when Goldman Sachs was saying to buy Chinese stocks.

Last week, panicked bank customers demanded their money at a regional bank in Sheyang country on China’s eastern coast. Instead of being an isolated or one-time event, this is a microcosm of what’s yet to come elsewhere in China.

At best guess, China’s total debt-to-GDP, which includes corporate, government, and household debt is around 200%-250% of GDP. Decelerating growth and an economic shock of unknown magnitude will only make it harder to pay off the debt. Or as Warren Buffett once said: “Debt is a four-letter word.”