How healthy are corporate balance sheets? It depends who you ask.

One news outlet said that U.S. firms are hoarding a record $1.6 trillion in cash led by Apple, Google, and Microsoft. Shockingly, that same report made no mention of corporate debt levels, which are also at all-time records.

During the previous 2009 recession high, aggregate outstanding corporate debt peaked at $7.3 trillion. Yet, in just five years, corporate America has amassed $2.33 trillion in new debt, bringing the total debt burden to $9.63 trillion. (See chart below) No matter how low interest rates are, 9.63 trillion anything is a humongous number.

Thus far in 2014, corporate borrowers in both tiers of credit risk (investment grade and non-investment grade or “junk”) are on pace to supplant last year’s borrowing record, according to the Securities Industry and Financial Markets Association.

Through the first six months of this year, U.S. corporations have already issued $603 billion in new investment grade debt (NYSEARCA:QLTA), which is 12% higher compared to the same period in 2013. Last year, the two largest corporate bond offerings ever – Verizon’s $49 billion and Apple’s $17 billion sale – were applauded. 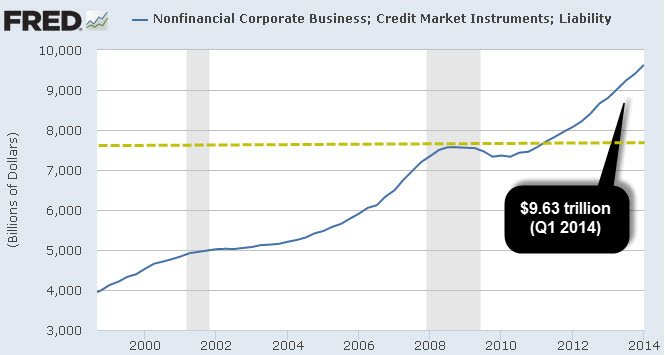 Has the new definition of “strong” corporate balance sheets become the ability to borrow cheaply? It sure seems that way.

Our just published video “The Myth of Improving Corporate Balance Sheets” by my colleague Chad Karnes examines the erroneous thinking about the actual health of corporate balance sheets.

Likewise, high risk corporate borrowers (Nasdaq:VWEHX) are aping the same speculative behavior of issuing as much “cheap” debt as they can get their hands on. Companies with a subpar credit rating (NYSEARCA:HYG) issued $181.5 billion in new debt through the first six months of 2014, which is 4.4% higher compared to the same period in 2013. Meanwhile, the average yield for high yield bonds fell below 5% to new record lows. If a thing such as credit risk still does exist, bond investors – with the depressed yields they’ve accepted – sure don’t remember what it means.

The total U.S. bond market (NYSEARCA:BND) – which includes both corporate and Treasury debt – is up 2.62% year-to-date. The yield on 10-year U.S. Treasuries (ChicagoOptions:^TNX) has fallen almost 16% since the start of the year to around 2.55%.

ETFs designed to increase in value when Treasury yields fall and bond prices rise like the ProShares Ultra 20+ Year (NYSEARCA:UBT) and the Direxion Daily 20+ Yr Treasury Bull 3x Shares (NYSEARCA:TMF) have jumped between 25% to 38% year-to-date.

Rock bottom interest rates have seduced companies to push capital spending and dividend payouts to seven-year highs. Fiscal restraint is most certainly not a hallmark of this particular cycle.

But eventually, the corporate borrowing binge will end. And when interest rates climb, the fatal flaw of over-indebtedness will become an unwelcome reality. Until then, it’s full steam ahead for the bull market in borrowing.

The ETF Profit Strategy Newsletter uses technicals, fundamentals, discipline and common sense to find opportunities that others miss. A 188% time-stamped gain from our 6/5 alert is our largest year-to-date winner.