Don’t Get Hit By a Falling BRIC

A credit bubble (China), inflation (Brazil), and the threat of war (Russia) have made BRICs a dangerous place to invest. Is the worst over?

“BRIC” is an acronym for Brazil, Russia, India, and China that was introduced in 2001. Enthusiasm for investing in stocks from BRIC nations rose in the mid-2000s as mega-emerging markets outperformed developed stocks (NYSEARCA:EFA).

Today, the BRICs (NYSEARCA:BKF) look like an oddball collection of dysfunctional countries – each with their own distinct problems.

The latest HSBC Emerging Markets Index (EMI) fell for the fourth month running to 50.3 in March, from 51.1 in February and the performance of BRIC stocks is unmistakably bearish. The chart below illustrates the massive sub-par performance of the BRIC ETF versus developed international stocks.  You’ll also notice the impressive sucker’s rally by BRICs from mid-March. Sharp rallies can and do occur right within bear market patterns, often tricking victims into believing a bottom has been reached. 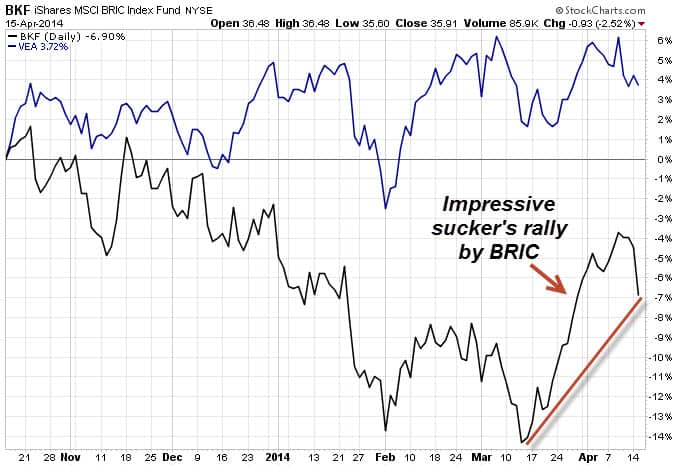 Output in three of the four largest emerging economies is sputtering and China (NYSEARCA:FXI) posted a marginal decline for the second month running, while India slipped back into contraction. Meanwhile, Russian (NYSEARCA:RSX) private sector output fell at the fastest rate since May 2009.

Russian holdings (NYSEARCA:RUSS) of U.S. Treasuries sank to $126.2 billion for the fourth consecutive month as it tries to bolster the faltering ruble.

In my latest BRIC video, I examine one of our top ETF trades at ETFguide over the past month – a short on Chinese stocks that resulted in a 23.5% gain over a two-month period.

Interestingly, stocks in India (NasdaqGIDS:INDY) have bucked the BRIC slide by gaining around 14% since the beginning of the year. It’s doubtful that India’s sizzling equity performance will lift its BRIC counterparts, but if you believe in longshots, then you’ll believe it can happen. 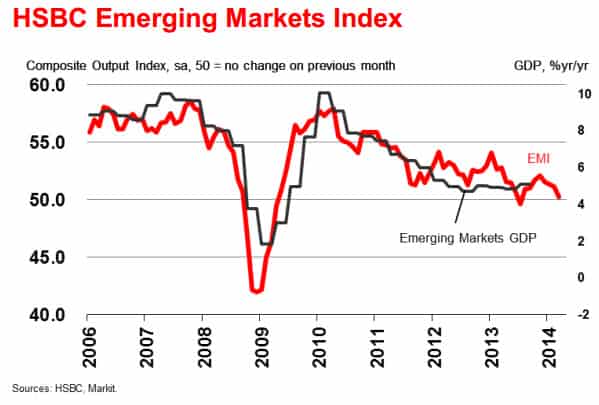 For now, the unfolding BRIC bear market (NYSEARCA:EDZ) is like a slow motion train wreck. On some days, it may seem like the wreck has gone away and won’t happen. But for patient and prudent bears that are correctly positioned, the reward for staying the course when the fury arrives should be great.