I was recently lectured on Twitter by a Wall Street strategist about why emerging market stocks (NYSEARCA:EEM) are a raging buy. Among his top arguments for being and staying long were extremely negative sentiment and chart patterns. He was particularly adamant about “depressed values” in Chinese stocks.

Interestingly, the view among other strategists that emerging market stocks are trading at bargain basement prices is so common on Wall Street, you could throw a penny in any direction and hit the right analyst.

The problem with these views – besides the fact they’re all dead wrong – is they ignore reality. Common sense tells us that what’s happening on the streets of Bangkok (NYSEARCA:THD) or Beijing always trumps an overdue technical bounce or cheap market valuation. Are riots bullish? How about urban air pollution that’s 10 times higher than the World Health Organization’s recommended levels? And you know what trumps that? The real time price action of stocks, which in turn, determines the winners and losers. 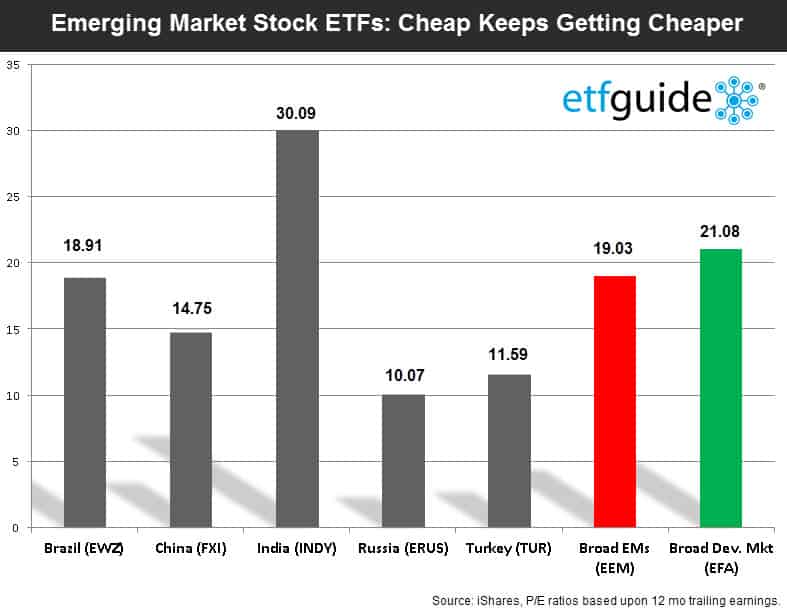 History Lesson on “Cheap”
Six years ago, we got an ugly lesson in what cheap financial assets smell like. Bear Stearns and Lehman Brothers – just before they went extinct – were both undervalued. Both companies were also way overdue for a technical bounce, according to leading chart readers of the day. Even CNBC’s Jim Cramer, who according to some accounts, eats and sleeps ticker symbols, was thoroughly tricked.

On March 11, 2008, Cramer yelled at a national audience saying, “Bearn Stearns is not in trouble” right when the stock was at $62.97 per share. Less than a week later, JP Morgan Chase acquired Bear for a renegotiated fire sale price $10 per share.

And so it is: During a crisis, as many emerging markets find themselves in today (see Argentina, Brazil, Turkey, and Thailand) cheap valuations can get cheaper. And buying too early is the wrong strategy because the road to destruction is littered with carcasses that paid attention to every piece of financial data they could consume, but the irrevocable truth of price action. Buying the right assets at the wrong prices is good for your ego, but not for your wallet.

Rather than buying into the propaganda du jour that emerging market stocks (NYSEARCA:EDZ) are cheap and overdue for a technical bounce, via our Weekly ETF Picks from Dec. 5, 2013 we took a stark opposite opinion of Wall Street’s populist view by writing:

“While we respect the rally Chinese stocks have enjoyed (7/3/13 to 12/1/13 run) , we’re nonetheless suspicious about the sustainability of the run. Aside from huge systematic risks, the Federal Reserve’s eventual scale back of QE is a threat to rising asset prices.  We’re buying ProShares UltraShort FTSE China ETF (NYSEARCA:FXP) at $14.65.”

Since our Dec. 5 trading alert, FXP has jumped 26% and our tandem options trade on iShares Large Cap China ETF (FXI) is already ahead by 41%.  In our just published Feb. 2014 ETF Profit Strategy Newsletter we reiterated: “The counsel to ‘be careful with Chinese stocks’ is bad advice. The prudent investor has two better choices: 1) Aggressively short Chinese equities, or 2) Aggressively avoid them.”

With Asia celebrating the Lunar New Year, China’s leadership will have time during the fiesta to come up with more Band-Aid solutions to repair their mortal economic wounds.  Curtailing excessive credit expansion without curtailing economic growth is like trying to achieve a slim physical build on a cheesecake diet. Besides that, the People’s Bank of China hasn’t had much experience with this kind of  crisis stuff, as their infrequent and devilishly opaque press releases show.

One of the few things Chinese equity bulls can celebrate is that Shanghai’s Stock Market will be officially closed through Feb. 7.

The ETF Profit Strategy Newsletter uses technical, fundamental, and sentiment analysis along with market history and common sense to keep investors on the right side of the market.  In 2013, 70% of our timestamped weekly ETF picks were profitable and a 525% gain was our biggest winner.

Facebook
Twitter
LinkedIn
PrevPreviousIs More Pain Ahead for Long-Term Bonds?
NextWall Street is Still Optimistic, Should You Be Too?Next