Emerging Markets and Parallels to the pre-2008 Crash

Are there parallels between the pre-2008 U.S. stock market crash and emerging markets today?

Emerging market bulls (NYSEARCA:EDC) say that cheap market valuations are a reason to own stocks from countries like China (NYSEARCA:FXI), Brazil (NYSEARCA:EWZ), Russia (NYSEARCA:RSX), and India (NYSEARCA:EPI). Are they right?

A similar argument was made about U.S. stocks just before the 2008 market crash.

The January 2014 edition of the ETF Profit Strategy Newsletter notes:

In retrospect, people that used historically cheap P/E ratios in 2007 as a reason to buy U.S. stocks (NasdaqGM:QQQ) were badly misguided. Will the future be any different for people who use the same rationale as their guide? 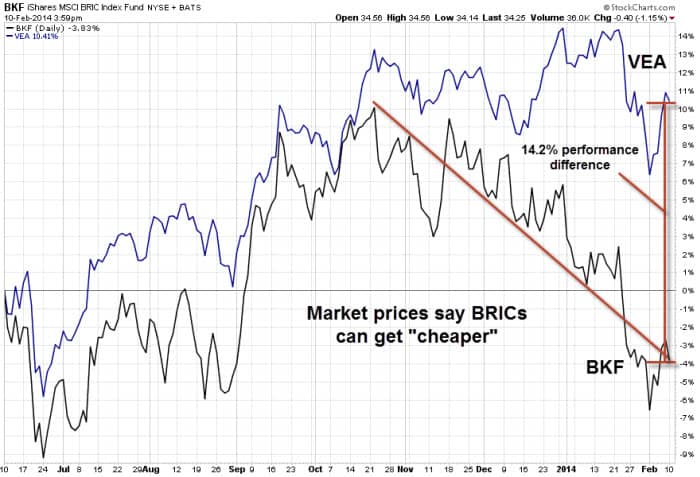 Stock market valuations do matter, but emotion and psychology (or what technicians call “market sentiment”) plays key roles in moving stock prices. This will always be the case so long as the stock market has human participants.

It’s also a valuable lesson for never exclusively using stock market valuations as a strict basis for investing or not investing. The better technique is to use valuations in conjunction with other key fundamental and technical indicators for a more complete view.