And never mind the conventional wisdom of group-think and scary analyst warnings like,  “Energy stocks are in deep trouble because Q1 losses will mark the first time any sector in the S&P 500 has reported an aggregate loss since Q4 2008.” Again, who cares?

(Audio) SunEdison’s Crash and Burn Impact on Your Mutual Funds

ETFs like the Direxion Daily Energy Bull 3x ETF (NYSEARCA:ERX) that magnify the performance of energy stocks with triple daily leverage have delivered strong results by gaining almost 30% YTD. In other words, group-think would’ve caused you to miss this trade. And that’s why following conventional wisdom is a time honored recipe for failure. 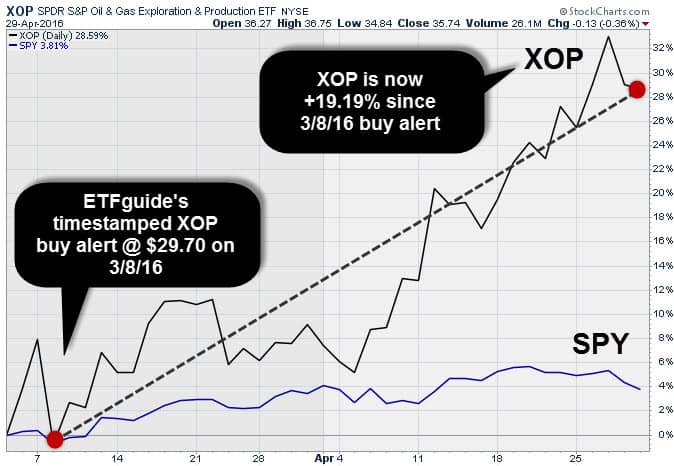 Contrary to the nearly universal view that energy stocks are untouchable, on March 7 via ETFguide PREMIUM, we saw a great opportunity in oil and gas producers (NYSEARCA:XOP) and issued the following alert:

“XOP is right up our contrarian alley. It’s lost money over the past 1, 3, and 5-years with annualized losses of -9.45%. Who wants to puke? Despite proclamations that everyone will be driving Teslas by 2020, we don’t believe or agree that oil and gas demand will evaporate to zero as certain Kool-Aid drinking clean energy analysts envision. We’re buying XOP at current prices ($29.70).”

“Although contrarian trades like XOP usually take longer to develop, they can be far more profitable compared to other types of trades. However, the problem of realizing profits is largely psychological. Why? Because most investors grow impatient and end up selling a great investment before it has time to blossom.”

XOP has risen over +19% since our timestamped alert compared to just a +3.39% gain for the S&P 500. (See chart above.) Oil and gas producers have also outperformed the broader energy sector. Much of this bounce is attributable to recovering crude oil prices (NYSEARCA:USO), which now trade in the $45 per barrel range.

Nevertheless, buying out-of-favor sectors before they start turning up is a perennial battle for most investors. Too few people do it. Why? Because they’re too scared a bottom hasn’t been reached.

Bottom line: Contrarian trades – although often grueling – have a proven track record of success for patient traders and investors. It’s also why I salute all contrarians on this final day of Financial Literacy month!

P.S. Contrarian trades are just one of four primary trading strategies we use at ETFguide for non-core investment portfolios.