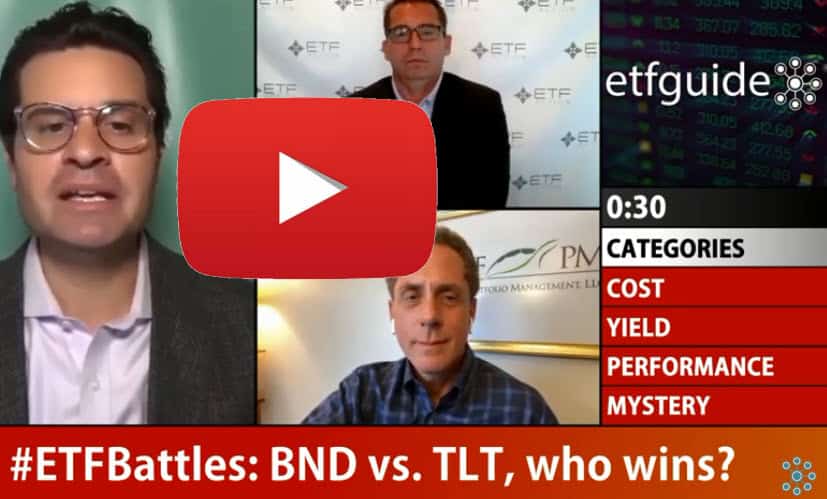 ETF Battles: BND vs. TLT – Which Bond ETF is Better?

This is an excerpt of ETF Battles between TLT vs. BND on ETFguide TV – it’s a showdown between two ETFs focused on the U.S. bond market.  Who wins the battle?

Ron: Well, how do you take the perennially dull proper and ho-hum world of bond investing and infuse it with some pizazz? I have no idea, but that doesn’t mean we’re not gonna try. Welcome to ETF Battles, I’m Ron DeLegge, and coming up on today’s program it’s a showdown between two of the world’s largest bond ETFs. It’s the iShares Barclay’s 20+ year Treasury ETF TLT versus the Vanguard Total Bond Market ETF, that’s ticker symbol BND.

Helping us to judge today’s face-off between TLT and BND is Dave Kreinces at ETF Portfolio Management, and Mike Akins at ETF Action.

The four battle categories between TLT and BND are cost, yield, performance, and then the mystery category where you, the judges, get to pick that single factor or multiple factors that you think are important. And that mystery category could end up deciding which of these two ETFs wins today’s battle.  We’re gonna go through each one of these battle categories one at a time.

Each of our judges is gonna have 30 seconds to give their analysis and their pick. They can choose TLT or BND as the winner in each respective category. They can also opt for a split decision. And then of course, at the end of the show, we’ll declare a final overall winner. So let’s begin with the first battle category, it’s cost. Mike, you’ve got 30 seconds, go.

Mike: Well here you go again. You’re putting a Vanguard fund in there and you’re asking me to judge cost, so I’m just gonna go ahead and say that BND is cheaper, but I’ll add a little more to that. Not only is it four basis points versus 15 basis points, and in management fee, but also, BND is a broader product. It’s gonna get you access to different types of areas of the market. TLT is a pure treasury product, so you’re getting diversification within the fixed income area across multiple different areas– It’s an aggregate products versus just a purely treasury, so BND, BND, on multiple factors is my cost winner.

Dave:  Hey Ron, you know, before I talk cost, I just want to say I’m super excited for this battle. Understanding bonds is really critical for investors to understand the real protection in their portfolio. And in full disclosure, we do trade TLT, the three times leveraged TMF, and we do not trade BND. But as far as cost goes, the expense ratio of 0.15% for TLT versus 0.35% for the total bond market leaves TLT at more than five times the cost of BND, but long-term treasuries provide much better protection. So even at almost five times the cost, I still give the win on cost to longterm treasuries, as surprising as that sounds, because while they’re both bond funds, you’re paying for very different things here.

Ron: Alright. That was shocking. But again, that’s, that’s what we sometimes get on the show and it’s also what our audience needs to hear. So thank you, Dave, for your analysis on that. We need to move to the next battle category, which is yield. This is important for bond investors because they’re always concerned with maximizing their cash flow. So let’s stick with you, Dave. Who wins the battle on yield between these two ETFs?

Watch the full episode of ETF Battles between TLT vs. BND on ETFguide TV