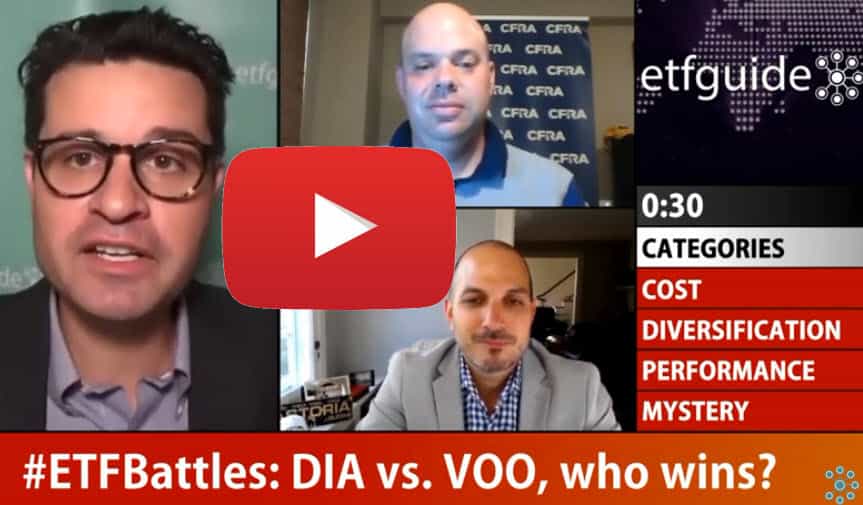 ETF Battles: DIA vs. VOO – the Dow Jones Industrial Average meets the S&P 500, Which is Better?

This is an excerpt of a ETF Battles between the SPDR Dow Jones Industrial Average ETF (DIA) and Vanguard S&P 500 ETF (VOO) – it’s a U.S. stock market rumble! Who wins the battle?

Ron: Profitable investing is this never-ending battle between being adequately diversified, and also wanting to have your money concentrated in assets that are performing the best. And as you’re about to find out on today’s episode of ETF Battles, we’re gonna illustrate this never-ending struggle of diversification versus concentration.

Today’s matchup is between the SPDR Dow Jones Industrial Average ETF (DIA) versus the Vanguard S&P 500 ETF (VOO). Another way to think about these two funds are the eldest sons and daughters of the Brady Bunch. For example, DIA was launched way back in 1998 when Jeff Bezos and Elon Musk were just 10 years old. That’s how long it’s been!

Helping us to judge today’s skirmish are two New York Mets fans. Last time I checked the Mets were still in first place. We’ve got Todd Rosenbluth, Head of ETF and Mutual Fund Research at CFRA and John Davi, Founder and CIO at Astoria Portfolio Advisors. Judges, great to see you again.

So we’ve got our four battle categories, cost, diversification, performance and then we’ve got our mystery battle category where you, the judges, get to pick whatever factor or several factors that you would think are important to this particular showdown. I’ve got my battle scorecard ready and you are going to pick DIA or VOO as the battle winner. You can also opt for a split decision. And at the end of the show, we’re going to declare an overall winner. So you’ve got 30 seconds in each battle category. We’re gonna begin with the first one, which is cost. Todd, get us started.

Todd: Well, Vanguard S&P 500 ETF is among, if not the cheapest, of the large cap ETFs available. Just three basis points. It’s actually tied with an iShares product for among the largest ETFs that charges that, extremely low cost. It’s also extremely liquid so from a trading cost perspective, there’s a lot of volume that’s behind this ETF and that keeps the spreads tight. It tends to trade inline with its net asset value. Those are some of the cost factors that we at CFRA think are important so my battle winner on this is voo.

John: You know, I don’t have any disagreements with Todd. They are the battle winner, VOO, whether you look at management fees, trading liquidity, a discount to NAV. Honestly I’m shocked that DIA’s is 16 basis points. In this day and age with everything’s cheap and costs are coming down, somehow, they’ve been able to keep that at 16 basis points and there’s still $20 billion in that ETF, DIA. So it’s a shocker that they’ve never reduced it, but I don’t look at DIA as a true investment vehicle, just some index that’s been around for hundreds of years. So, I don’t really pay attention to it. We would never invest in it, per se, but I’d give the edge, just from expense ratio, to VOO.

Ron: Okay, very good. We need to move to the next battle category, which is diversification. We’re going to stick with you, John, who wins the battle between DIA and VOO?

John: DIA has 30 stocks that makeup Dow Jones Industrial Average VOO is the S&P 500, which I think actually has like 508 stocks. So, the more concentrated you are, the more risk in theory, per se, so investors should keep that in mind, but VOO would win just from a diversification standpoint in terms of just the number of stocks in it compared to DIA.

Ron: What about you, Todd? Do you agree with John’s analysis on diversification?

Watch the full ETF Battles Doubleheader between DIA vs. VOO on ETFguide TV