Gift-Wrapped Trades Courtesy of the Fed

The almost +2% jump in the S&P 500 (SNP:^GSPC) just three-days before the release of the Federal Reserve’s no rate hike decision looks suspicious and so does the heavy call buying volume. And while this type of curious trading activity resembles insider buying right before a big corporate takeover, I’m confident the Securities and Exchange Commission will look the other way by pretending nothing happened.

(Audio) Ron DeLegge does a $1.1 million Portfolio Report Card for TB in Oregon

In case you’re one of those sad groupies that doesn’t believe in information leaks, the Federal Reserve a few months ago admitted that it “accidentally” published internal staff forecasts for interest rates (ChicagoOptions:^TNX), unemployment and other key indicators. Normally, the Fed would have published the data five years from now. But, its staff forecasts were erroneously added to the Fed’s public site on June 29, giving the entire market an inside view.

Even though one media outlet naively dubbed the Fed’s lack of confidentiality as “A leak so inconsequential that the Fed had to break it to us,” the truth is ANY leaks of ANY sort are serious and shouldn’t be occurring. Put another way, don’t count us among the gullible masses (and media) who believe Federal Reserve data breaches are accidental, impossible, or insignificant. The fact is quasi-governmental agencies like the Fed, along with the government itself, are prone to both negligence and law-breaking behavior. 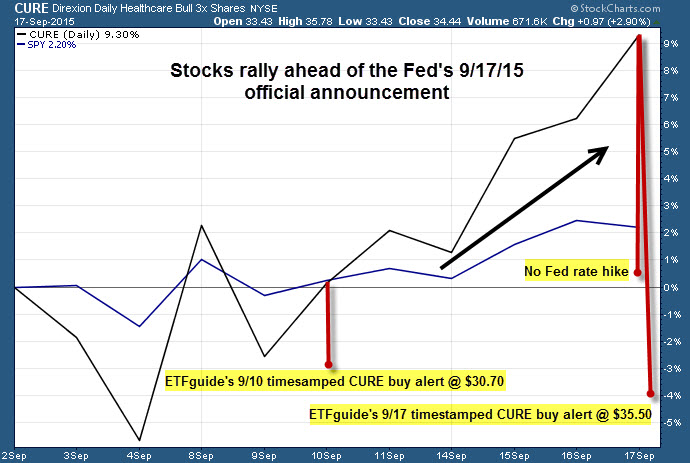 Ahead of the Fed’s Sept. 17 punt on interest rates, we alerted premium members via our ETF Weekly Picks on Sept. 9 to be ready:

“Will the Fed raise interest rates? The Fed is a bureaucratic institution and in the end, the status quo of doing nothing usually wins. Our 1-2 week outlook is to buy stocks on weakness in expectation of a post-Fed meeting pop. And our first inclination is to stick with the industry sectors that have shown the best relative performance, like healthcare stocks. We’re buying the Direxion Daily Healthcare Bull 3x (NYSEARCA:CURE) at current prices near $30.70.”

Anytime the stock market cooperates, we’re humbly grateful and we unloaded CURE on 9/17 at $35.50 for a  +15.6% timestamped one-week gain. Please understand that our short-term bullish equity trade could’ve easily worked well in other categories (and did) like small caps (NYSEARCA:TNA) and gold miners (NYSEARCA:NUGT), but we chose healthcare stocks (NYSEARCA:XLV) because of their solid technicals and strong fundamentals relative to the rest of the market.

In retrospect, stocks (NYSEARCA:IVV) were surprisingly strong leading up to the Fed’s Sept. 17 official announcement that interest rates would remain unchanged. Who knew that printing money would be this easy and which market players knew about the Fed’s gift-wrapped trades beforehand?