Each month, our Mega Investment Theme Report organizes the order of major events by their impact and importance. And swelling sovereign debt (NYSEARCA:BWX) continues to be a stubborn trend that has made every single report.

In Ernest Hemingway’s classic novel, “The Sun Also Rises” someone asks the character Mike Campbell how he went bankrupt. He quips: “Gradually, then suddenly.” Doesn’t that aptly describe the deadly path world governments are on?

Last week, I explained to readers how the U.S. government’s debt load (NYSEARCA:TLT), like U.S. stocks, reached all-time highs of $17.41 trillion. At the current pace of overspending, U.S. debt should top $18 trillion within just nine months! Over-indebtedness, however, has morphed into a global problem of epic proportions.

WATCH: 2 Easy Ways to Add Commodities to Your Investment Mix

Global debt markets (NASDAQ:BNDX) have now skyrocketed more than 40% to an estimated $100 trillion in mid-2013 up from $70 trillion in mid-2007, according to the Bank for International Settlements (BIS). Without surprise, governments continue to be the biggest issuers of new debt as the expansion of government debt at all levels (state, city, and national) moves higher. 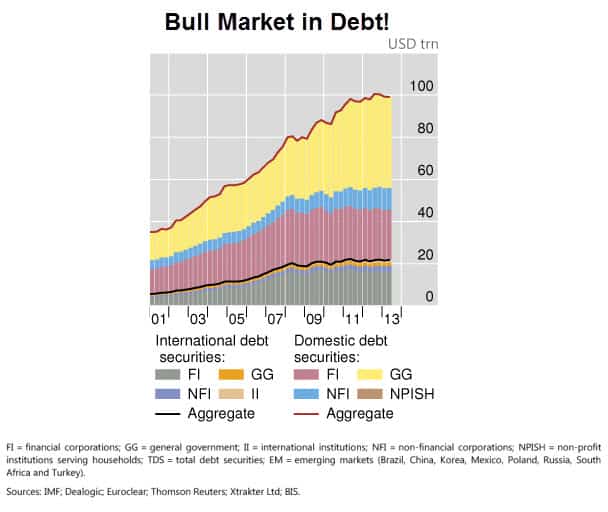 Debt issuance by non-financial corporations has grown at a similar rate, albeit from a lower base.

Ultimately, the Keynesian philosophy that currency issuing governments can spend themselves out of debt will be proven wrong. As with people and corporations that over-leverage and overspend, governments will go bankrupt gradually, then suddenly. It’s up to the prudent investor to be on the right side of the bond market when the game finally ends. Until then, global debt will continue to swell.