Have Precious Metals Seen Their 2014 Peak?

After posting its first monthly decline of 2014, gold now trades near 7-week lows and the charts are looking ugly.

As readers familiar with our research know, last year we were consistently bearish on gold (NYSEARCA:GLD) and precious metals (NYSEARCA:SLV) along with mining stocks (NYSEARCA:GDX).

Market extremes within the gold market (NYSEARCA:NUGT) are common. And when market sentiment towards gold and mining stocks (NYSE:NEM) became overly bearish as it did in December 2013, we took that as an opportunity to pounce.

“This year will be the third consecutive year of losses for gold mining stocks. But once year-end tax loss selling is over, we’re anticipating a bounce in beaten down gold miners in January. It remains to be seen whether this bounce will become a bigger trend change for GDX from down to up, but it’s nevertheless a short-term profit opportunity. We’re buying the Market Vectors Gold Miners ETF (GDX) at $21 and we’re also buying GLD MAR 2014 $112 call options at $640.” 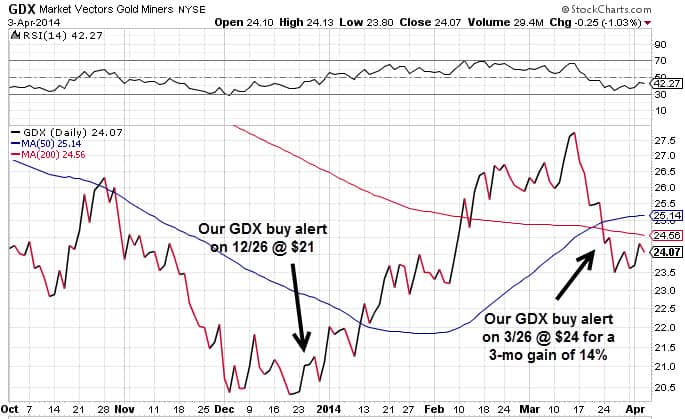 The unfortunate part for investors that buy gold bullion at the wrong price is they don’t get paid any dividends while they wait for it to go back up.

GLD hit its yearly closing high of $133.10 on March 14 and it’s been all downhill since then. Interestingly, that peak came just as bullish sentiment toward gold high. Another great setup is coming.

The ETF Profit Strategy Newsletter and Technical Forecast uses fundamental and sentiment analysis along with market history and common sense to keep investors on the right side of the market. We cover gold along with other major asset classes like stocks, bonds, and currencies. In 2013, 70% of our weekly ETF picks were winners.

PrevPreviousWatch Out for Falling BRICs
NextFrontier Markets: Investors Double Up on RiskNext