How Would Your Portfolio Do in a 50% Market Decline?

Prudent investing in a reckless world has become a long-forgotten idea. And the 6-year run-up in U.S. stock prices (NYSEARCA:VOO) has certainly been a contributing factor.

After love, risk might be the most misunderstood and misinterpreted word in the English language. Today, people’s perverted sense of risk management is making sure they don’t miss the next big run in Netflix or Tesla.

Forgetting History
People have let their guard down and are once again repeating the same mistakes investors in previous eras have made by under-estimating the risk character of their investments. The only difference between now and previous bear markets like 2000-02 and 2007-09 is that everybody today is older and not necessarily wiser.

As a result, I felt a certain obligation to help the investing public to have a multi-dimensional and complete view of their entire investment portfolio. But figuring out how to do it on just a single written page that anyone could understand took me years to develop.

When I first introduced the idea of assigning a written grade to investors’ portfolios back in 2010, I had my doubts. Would people embrace my Portfolio Report Card concept? Would people send me their portfolio data for diagnosis? How would I fit their final grade onto just one page? Would my grading system be robust enough to work on all portfolios, regardless of the size and tax status? Would people be motivated to eliminate the weaknesses inside their portfolios identified by the Portfolio Report Card?

A Crucial Grading Factor
In case you didn’t know, risk is one of the most important grading categories of Ron DeLegge’s Portfolio Report Card grading system. And over the past year, I’ve diagnosed more portfolios than the typical investment advisor sees during their entire career.

One of the most consistent patterns I’ve seen from the Portfolio Report Cards I’ve recently executed is that people are jacked up on risk because of over-allocation to stocks (Nasdaq:QQQ).

Back on Aug. 18, 2004, Bridgewater Associates (run by billionaire Ray Dalio) made a similar observation and classified it as the “biggest investment mistake.” Bridgewater pointed out that over 80% of a typical investor’s risk is in stocks and that because of that over-exposure, owning other asset classes like municipal bonds (NYSEARCA:MUB), Treasuries (NYSEARCA:TLT), and REITs (NYSEARCA:VNQ) does little to balance out the portfolio’s risk profile.  According to Bridgewater’s analysis, the over-allocation to equities at the expense of other asset classes penalizes investors by roughly 3% in expected value, which could be used to cut risk. Put another way, Bridgewater’s original assessment of investors’ portfolios back in 2004 was true and it’s still true today. 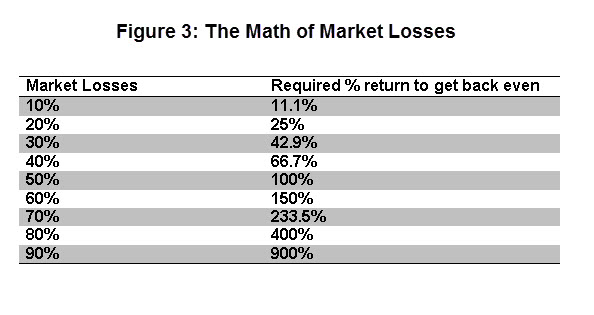 A Lazy Approach
The fairyland idea that prudent risk management is simply a function of doing nothing during a dreadful bear market is popular but ignorant view. First, it incorrectly assumes that bear markets (NYSEARCA:SPXS) will be short-lived. Second, it incorrectly assumes that bear markets will only happen during non-emergency moments or when we least need our money. More importantly, the do-nothing approach of “staying the course” badly misses in the biggest way because it erroneously assumes that Joe and Jane Investor have well-designed investment portfolios. My data shows quite the opposite; that Joe and Jane Investor have poorly constructed portfolios that are one-dimensional, under-diversified, and not the least bit equipped to deal with a severe market decline of 20% or more.

Figure 3, which will be in my upcoming book, provides a sober look at the math of market losses. As you can see, if your portfolio suffers a 50% cut, you’ll need a 100% return just to get back to even! And since the velocity of bear markets happen faster compared to bull markets which tend to happen over a period of years, it often takes many years for an investor to recoup their losses – that’s if they ever recover at all. And that’s exactly why having a margin of safety within your portfolio is imperative.

I am grateful to the many people – individual investors just like you – who have allowed me to analyze and grade their investment portfolios. I also want you to know that my Portfolio Report Card grading system just quietly passed a new milestone: over $100 million of investments have now been analyzed and graded!

How would your portfolio do during a 50% market decline? Remember: Bear markets have happened in the past and will happen again in the future. And the time to find out if your investment portfolio is architecturally sound and read for the fire is before not after the market event.

Ron DeLegge is the Founder of ETFguide and inventor of the Portfolio Report Card grading system. Find out if your investment portfolio passes or fails and listen to Ron’s weekly podcast.