Having an entrenched view is a good recipe for failure. And perhaps, there’s no better Wall Street case study than Peter Schiff, a precious metals permabull.

On Feb. 13, 2013, Schiff stubbornly reiterated his bullish view of gold, being quoted – as his public relations handlers always make sure he is – in all the mainstream media outlets that still accept his conspiracy theory baloney. Schiff’s specific call was that gold is headed to $5,000 an ounce.

Below is a chart that shows how gold (NYSEARCA:GLD) and gold mining stocks (NYSEARCA:GDX) have performed since Schiff’s fear mongering $5,000 per ounce call. Both GLD and GDX are down 28% and 55% respectively since Feb. 2013. 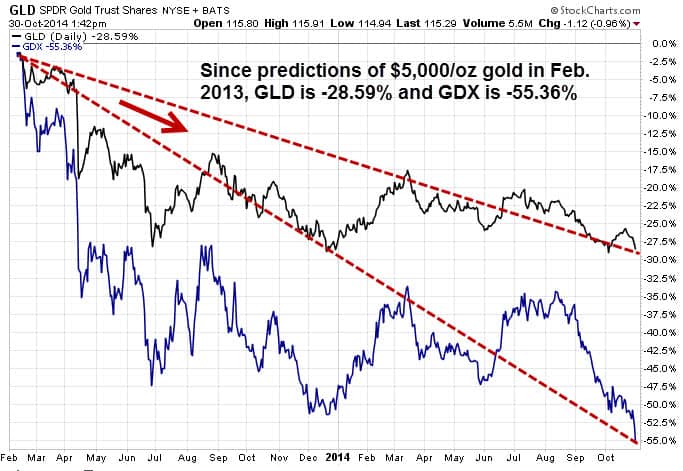 Furthermore, just as Schiff was spewing his rosy gold forecast, we said to do the exact opposite. In our timestamped Weekly ETF Pick from Feb.14, 2013 we wrote to our readers:

“The Market Vectors Gold Miners (GDX) has lagged both the broader U.S. stock market along with the SPDR Gold Shares (GLD) by a very significant margin. At present, GDX trades around $41.50 and is well below both its 50 and 200 day moving average. Buy the Direxion Daily Gold Miners Bear 3x Shares (DUST) at these levels. A double digit slide for gold would likely translate into a 20%+ loss in mining stocks. This scenario offers some big upside potential for bears.”

Did we allow one fantastic bearish trade to keep us entrenched in a singularly negative view of precious metals? (NYSEARCA:GLTR) Not at all! In fact, just as we saw negative sentiment toward gold climaxing, we used it as a wonderful short-term opportunity to buy when others were panic selling. You’ve heard about doing the opposite of the crowd, right?

Via our our ETF Weekly Pick issued on Dec. 26, 2013 – when the world was hung over from the holiday and those who weren’t were furiously unloading gold – we wrote to our readers:

“Once year-end tax loss selling is over, we’re anticipating a bounce in beaten down gold miners in January. It remains to be seen whether this bounce will become a bigger trend change for GDX from down to up, but it’s nevertheless a short-term profit opportunity for aggressive contrarians. Our tandem options trade is to buy the GDX JAN 2013 20 call options (GDX140124C00020000) at around $140. The call options expire on Jan.24, 2014.”

How did our short-term GDX bullish trade turn out? We bagged a 26.5% two-week gain on our GDX trade. And the only thing better than that type of performance return, is the chance to do it again.

Just as rollercoaster sentiment wave toward gold and gold miners was again souring, via our Weekly Pick issued on June 5, 2014 we wrote to readers:

Forget about what happened in the past, what about now?

The 44% pop in the Direxion Daily Jr. Gold Miners Bear 3x Shares (NYSEARCA:JDST) and the 30% jump in the Direxion Daily Gold Miners Bear 3x Shares (NYSEARCA:DUST) over the past five days has been good to our readers. We’ve already bagged double digit gains in just a matter of days and we still have other open gold ETF trades that are up big too. (See p. 4 of our Nov. 2014 newsletter for DUST and JDST buy alerts.)

Although the price trend for gold and mining stocks (NYSEARCA:GDXJ) has been down since 2011, our body of work shows that not being entrenched in a singularly rigid view has allowed us to capitalize on both bullish and bearish trades. Now what?

If gold’s ultimate knockout punch is yet ahead, listening to the sorry advice of gold permabulls like Peter Schiff won’t help you. Not unless you want to be on the receiving end of an ugly TKO.

The ETF Profit Strategy Newsletter is your gold knockout punch HQ. We use technical analysis, market history along with common sense to keep investors on the right side of the market. All readers get email and text alerts.