For most of this year, stock market volatility has actually outperformed the stock market itself. But for whatever reason, it’s an unpopular narrative that’s been and continues to be ignored by the mainstream media.

The chart below illustrates the relationship between stocks and volatility in 2014. You’ll notice how the S&P 500 VIX (ChicagoOptions:^VIX) (black line) has spent only brief periods below the S&P 500 (blue line) and currently, we’re in the midst of another one of these lull periods.

“Don’t just brace for higher volatility, but profit from it,” is a statement we’ve uttered to our readers countless times.  It’s something we’ve both said and done.

“If the rise to 21 was fast and furious, that means the next VIX pop will likely be the same and we want to be ready. On the CBOE, VIX put options reached a record level of 3.2 million contracts last week. Although the crowd has been right (so far) on this trade, we like our money making odds by betting against them. We’re buying the VIX APR 2014 13 call options (VIX140416C00013000).”

How did it work out? By combining charts, market sentiment, and common sense, we outmaneuvered the herd. Just as the VIX was in the midst of its springtime jump (See number 4 on chart below), we exited the final leg of our April VIX trade with a two-month blended gain of 21%.

Owning the VIX (NYSEARCA:UVXY) when no one else wants anything to do with it takes moxie. It also requires a keen understanding of herd psychology and the self-control to avoid imitating their money-losing habits. You see, the herd (or investing masses) is engaged in a horse race but they keep thinking and acting like sheep. But sheep don’t ever win horse races.

Over the past five months, the VIX (NYSEARCA:TVIX) has spiked 20% or more four times giving attentive and opportunistic students of the market plenty of chances to cash in. In fact, during one of those Fast and Furious moves, the VIX surged more than 50%! (See number 2 on the chart below) 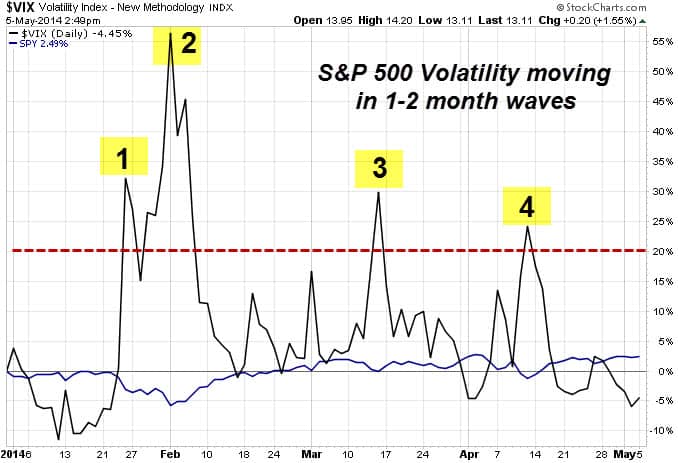 Despite one all-time high after another in the U.S. stock market (NYSEARCA:VTI), there’s been little conviction about the strength of these highs in the volatility marketplace (NYSEARCA:VXX). In not one single instance did the VIX make new all-time lows while the stocks (NYSEARCA:DIA) were topping.

Like all previous times, the best occasion to prepare for the next VIX surge is before it happens. You don’t need to be a VIX trader to appreciate that.

The ETF Profit Strategy Newsletter uses technical and fundamental analysis along with market history and common sense to keep investors on the right side of the market. We cover all major asset classes like stocks, bonds, and gold. In 2013, 70% of our weekly ETF picks were winners.