MyRA is Dead on Arrival

During his State of the Union address, President Obama unveiled his new plan to increase retirement savings. The plan is dubbed “MyRA” and is geared for people without a company sponsored retirement plan.

Sadly, MyRA is more than a futile attempt at preventing people from retiring without money. It’s another shining example of grandstanding and brow beating of the American public by out-of-touch bureaucrats, telling people to save more money for retirement or else.

Problem #1
American’s household income has been stagnant over the past 19 years. Today, the average household makes exactly what it made in 1995; $51,000. (See chart below) People cannot accumulate adequate financial savings if their earnings power isn’t growing.

Problem #2
MyRA is zero benefit to the 20.6 million people without a job. Furthermore, the labor force participation rate near 62.8% is at its lowest level in 35 years.

It’s an insult to be preaching to the public they need to save more money, when too many Americans still lack a good and productive job. 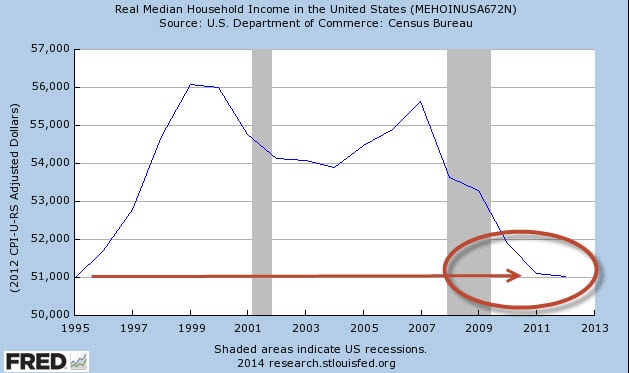 Problem #3
Retirement savings from MyRA is supposed to be funneled into U.S. Treasuries. A better investment alternative, albeit an imperfect solution, would’ve been to offer a 50/50 even split between stocks (NYSEARCA:SCHB) and bonds (NYSEARCA:BND). At the very least, investment risk could be evenly divided.

In this case, the exclusive option of Treasury or U.S savings bonds (NYSEARCA:TLT) in MyRA accounts smells like a self-serving plan intended to help the U.S. government finance its reckless spending via gullible and unsuspecting citizens. Guess who gets slaughtered when the Treasury market eventually implodes because of government overspending?

Problem #4
MyRA’s idea of being a flexible plan that allows people to save as little as $5 is a total joke. Are the financial planners in the White House serious? People aren’t going to achieve a comfortable retirement income saving $5 per month in a U.S. government bond earning a 1% interest rate.

Summary
MyRA is a backwards plan because it doesn’t tackle the problem behind a lack of retirement savings in the right order. It proposes a poorly designed plan to get people to save money for retirement, when many of the people the MyRA plan targets don’t have adequate wages or job stability in the first place.

Wealth at retirement doesn’t happen by accident. It comes from uninterrupted work and steady wage growth. In turn, both of these things encourage higher retirement savings.

From traditional IRAs to ROTH IRAs and 401(k) plans, there’s no shortage of retirement savings vehicles with better investment choices than MyRA. Retirement savers who want to invest in Treasury bonds don’t need a MyRA plan. They can invest that way elsewhere, even if their employer doesn’t offer a workplace retirement plan.

The American worker isn’t going to achieve retirement security from a silly and shallow financial scheme like MyRA.

Besides having a really awkward and confusing name, MyRA pretends to fill a missing gap that simply doesn’t exist. It’s a poorly designed idea by desperate central planners trying to be heroes. Or, as they say in the medical field: “Dead on arrival.”

The ETF Profit Strategy Newsletter uses technical, fundamental, and sentiment analysis along with market history and common sense to keep investors on the right side of the market.  In 2013, 70% of our weekly ETF picks were winners.