Do You Need to Buy at Market Bottoms to Get Profitable Results?

Legendary speculator Bernard Baruch once quipped: “Don’t try to buy at the bottom and sell at the top. It can’t be done except by liars.”

Baruch was on to something. And since reams have been written and said about tops and bottoms in both individual securities along with broader markets (NYSEARCA:VTI), we can’t help but ask: Does a person need to buy at the absolute bottom to turn a profit?

Hit the rewind button to July 15, 2015, when via ETFguide’s Weekly Picks we wrote the following timestamped ETF trade alert to premium members:

“Mining stocks are in puke territory and trading 15% below their 50 and 200-day moving average. The Market Vectors Gold Miners ETF (NYSEARCA:GDX) is oversold and market sentiment is presently overly bearish. We’re buying the Market Vectors Gold Miners (GDX) at current prices near $16.50. Buying depressed out-of-favor assets takes guts, but with enough patience and time, the results can be rewarding.”

Since our GDX trade alert on Jul. 15, GDX has been dead money and it wasn’t until Jan. 19, 2016 when GDX hit a rock bottom closing price at $12.47. The rest of the global gold mining sector (NYSEARCA:RING) too, went straight into the toilet.

And now comes the fun part. 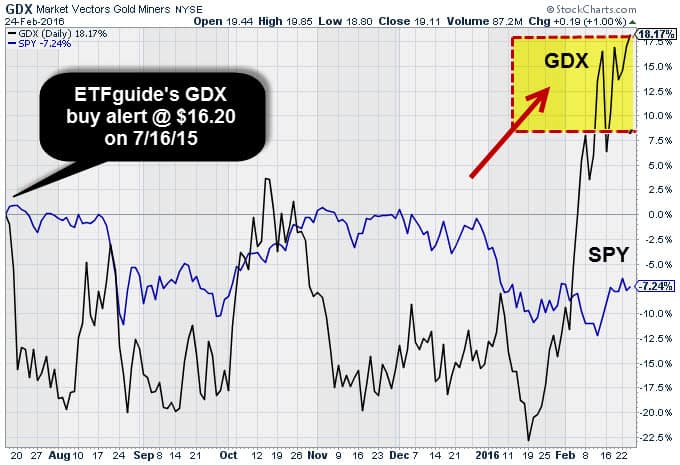 Our GDX position – which we did not buy at the market bottom – is now ahead by a respectable +18.11% (see chart above) and it’s still an open trade. Only a greedy slob would be unhappy with that kind of return in this kind of market. It also explicitly proves that you don’t have to buy at market bottoms to turn a profit.

I would argue that having stamina, stomach, and patience (SSP) are far more important than buying stocks (NYSEARCA:DIA) or whatever else at the bottom. Why? Because even a trader or investor that buys at the bottom but lacks SSP, will inevitably self-destruct. And besides that, nobody but “liars” consistently buys at market bottoms – nobody.

Another real life example – and one of the most extreme cases I’ve ever seen – that buying at market bottoms isn’t a prerequisite to achieving great profits is a Portfolio Report Card I did on my Index Investing Show podcast for a 72-year old man with a $26.9 million portfolio.

What did he own?

This particular guy invested in biotech stocks (NYSEARCA:XBI) right before the 1987 stock market crash. Bad timing. He also bought Apple (NasdaqGS:AAPL) a few years later in 1991 which again was really bad timing. It was such bad timing that ten years later, he was down 25% on his original investment in Apple! Instead of bailing, his SSP (stamina, stomach, and patience) kept him in the game and legendary results followed. Even though he missed several market bottoms in Apple, he was still able to turn an $84,000 investment into over $8 million.

In summary, if you want profitable investment results, stop focusing on tops and bottoms and start cultivating SSP.