How difficult of a trading environment has 2016 been?

It’s been so bad that BlackRock’s $1.9 billion global credit hedge fund is off to its worst yearly start in almost two decades. According to reports, the fund was hurt by crashing junk bonds (NYSEARCA:HYG) and spiraling crude oil (NYSEARCA:USO) prices. Who saw that coming? And if one of the world’s largest asset managers (NYSE:BLK) with around $4.3 trillion under management can’t get it right, who can?

Goldman Sachs, also known as the “Great Vampire Squid” in some protestant circles, has already reversed course on five of its top six trade ideas for 2016. The good news is the squids have 10 and a half more months to come up with better trades.

Despite changing its mind on presumably its “best trade ideas” of the year, Goldman still hasn’t changed its mind about one particular asset class: gold. The firm remains uber-bearish on gold prices (NYSEARCA:GLD) and is forecasting $1,000 per ounce by year end.

It’s worth mentioning, because gold has been a top year-to-date performer thus far. This topic is discussed in my latest podcast, “The Gold Monster Awakens.”

Look at the chart below. It shows how the SPDR Gold Trust (GLD) and Market Vectors Gold Miners ETF (NYSEARCA:GDX) are already up 13.93% and 28.21% respectively. Given the roughly 7% fall in the S&P 500 (NYSEARCA:VOO) since the start of the year, that’s  some big league relative outperformance by gold focused ETFs. 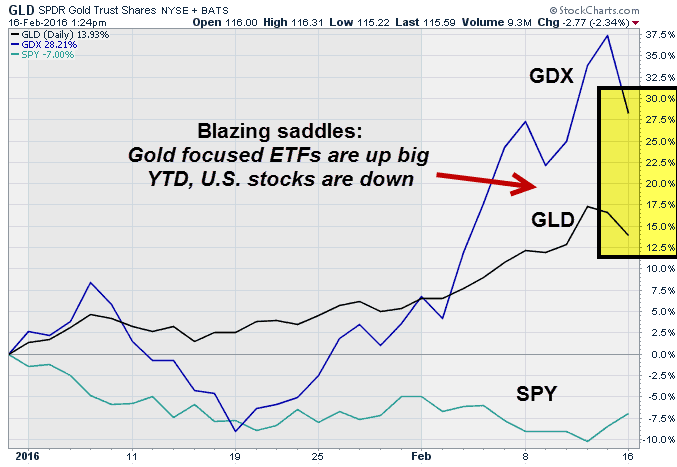 At ETFguide, we’ve never been goldbugs per se, but that doesn’t mean we don’t smell opportunity and pounce when given the chance.

“Year-end tax loss selling in depressed gold mining stocks is now offering opportunistic traders a chance to make some money. How? By doing the exact opposite of the crowd and buying gold miners on weakness vs. selling like everyone else. Since the beginning of the year, gold miners (GDX) have been crushed -22.36% and are now in their puke phase. We already own GDX and we’re buying the Direxion Gold Miners Bull 3x (NYSEARCA:NUGT) at current prices near $27.75.”

Since our Dec. 9 timestamped alert, GDX has jumped just over +24% while NUGT has soared +59%. In this trade, we deliberately chose to play the rebound in gold via mining stocks. Historically, the sector has delivered around 1.5 to 2 times the performance (bullish or bearish) of physical bullion. And given the -68% assassination of gold miners over the past 5-years, the risk/reward ratio was just too great to pass up.

We honestly don’t know what’s ahead for gold (you’ll have to ask Goldman Sachs) or gold miners (NYSEARCA:GDXJ). But we do know mean reversion when we see it. We also know that buying out-of-favor and universally hated assets is a winning formula for the patient investor.

PrevPrevious4 Moments When “Stay the Course” is the Wrong Investment Advice
NextDo You Need to Buy at Market Bottoms to Get Profitable Results?Next