Last week the Wall Street Journal reported an uptick in auto delinquencies from sub-prime borrowers to “the highest level since 2008.”

The First Trust Nasdaq Global Auto ETF (NYSEARCA:CARZ), which tracks a basket of 38 global automobile stocks, has underperformed the broader U.S. stock market over the past year. CARZ has declined almost 5% compared to a 13.04% gain in the S&P 500 (NYSEARCA:IVV). Despite that subpar return, automakers are expected to have brisk sales this year.

“We expect the auto loan market to continue to perform exceptionally well in 2015, with more sales leading to continued increases in auto loan debt per borrower as the national portfolio gets younger on average,” said Peter Turek, automotive vice president in TransUnion’s financial services business unit. “We anticipate the economy to continue to improve in 2015, with a better employment picture helping the auto industry. While the auto loan delinquency rate has slowly risen to a point where it will be above 2010 levels, we are still far off the peaks observed in 2008 and 2009 when delinquencies were more than 30 basis points higher.” 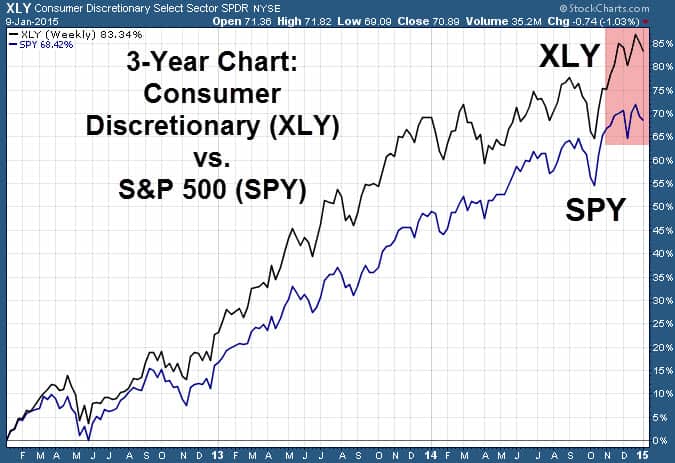 If trouble is brewing among consumers and their ability to pay auto loans, it has yet to be reflected in the performance of the Consumer Discretionary Sector SPDR ETF (NYSEARCA:XLY). Over the past three years, XLY has easily beaten the S&P 500 by gaining around 84% compared to a 67% gain for the S&P. XLY contains 85 stocks like automakers, restaurants, travel, and entertainment companies that are extremely sensitive to consumer spending.

TransUnion is forecasting the national auto loan delinquency rate (the ratio of borrowers 60 or more days past due) to increase modestly from 1.20% last year to 1.27% by the end of 2015.