Treasury Doomsayers Get Grilled by Hated Rally in Bond Prices 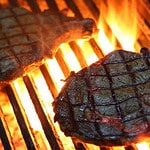 In late 2013 just before the Federal Reserve began its scaling back on monthly Treasury bond purchases, the conventional wisdom was that interest rates would rise and bond prices would fall. Invariably, the consensus opinion was – at it has been since “quantitative easing” or QE began in 2008 – that “interest rates have nowhere to go but up.”