China’s unexpected drop of 18.1% for February exports was the biggest decline in Chinese exports in almost five years and its biggest trade deficit ($23 billion) in two years. (Analysts, that over-optimistic bunch, had forecasted a 7.5% rise.)

In January, a survey-based indicator of China’s manufacturing sector fell for the first time since Sept. 2012.

All of this puts into question not just the oddball cocktail mix of BRIC nations (Brazil, Russia, India, and China) (NYSEARCA:BKF) and a weirdo investment mix (thank you Jim O’Neill), but the very idea that mega emerging economies operate independently of their global peers. Decoupling is a farce.

AUDIO: China’s Year of the Bear

Cleary, the People’s Bank of China (PBOC) is concerned about China’s domestic economic growth prospects, otherwise they wouldn’t have slashed the yuan’s (NYSEARCA:CYB) reference rate by a not-so-insignificant 0.18%.

China’s economic prospects are further complicated by the solvency of credit backed “wealth trusts”, declining real estate prices (NYSEARCA:TAO), and its inescapable domino effect on Chinese banks (OtherOTC:BACHY). Since the full brunt of this developing credit event has yet to be felt, bullish declarations that China’s credit problems are near their end, are premature.

More important than China’s economic data, is the ragged performance of China’s stock market. As a leading indicator, Chinese stock prices have been signaling problems ahead for quite some time.

The Shanghai Composite over the past four years shows a descending chart pattern of lower highs. Although the downtrend subsided when the index hit 2000, each of the last three bounces has resulted in a lower high with the downtrend performance uninterrupted. (See graph) Contrary to what emerging market bulls say, this isn’t a buy signal. 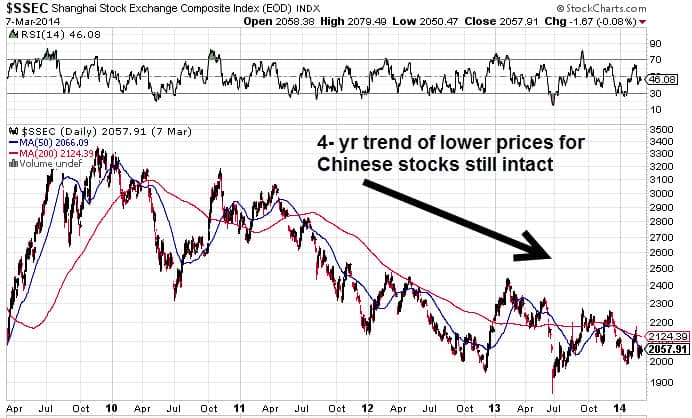 Chinese stocks as measured by the SPDR S&P China ETF (NYSEARCA:GXC) have already slid more than 8% when we issued our FXP buy alert. And on Feb. 10, we sold the final leg of FXP at $75.50 for a blended two-month gain of 23.5%. FXP aims for double daily opposite performance to large cap Chinese stocks. That means if Chinese equities fall 1%, FXP should be up 2%.

Since its Nov. 2010 peak, the iShares Large Cap China ETF (NYSEARCA:FXI) has slid 26%, already surpassing the official definition of a bear market decline, a 20% fall from peak to trough. Our tandem FXI options trade is still open and is the right place for hungry bears, among others (NYSEARCA:YANG). Are even larger gains ahead?

Chinese philosopher, Lao Tzu said, “A journey of a thousand steps must begin with a single step.”

While that’s true of life, it’s also true of China’s unfolding bear market, which is like a train wreck journey in slow motion. On some days, it may seem like the wreck has gone away and won’t happen. But for patient and prudent bears that are correctly positioned, the reward for staying the course when the day of fury arrives should be great.