This Seasonal Trend has been a Slam Dunk

In the winter it snows and in the spring flowers bloom.  It’s one of those things you can always count on. And like nature, the stock market, has its own set of yearly trends.

One of the market’s strongest seasonal forces that has been a slam dunk this year is something called the “January Effect.”  It’s the yearly tendency of small cap stocks (NYSEARCA:IJR) to outperform large caps (NYSEARCA:DIA).

The chart below shows how small cap ETFs like the iShares Russell 2000 (NYSEARCA:IWM) and the triple daily levered Direxion Daily Small Cap Bull 3x Shares (NYSEARCA:TNA) have beaten the performance of the SPDR S&P 500 ETF (NYSEARCA:SPY). 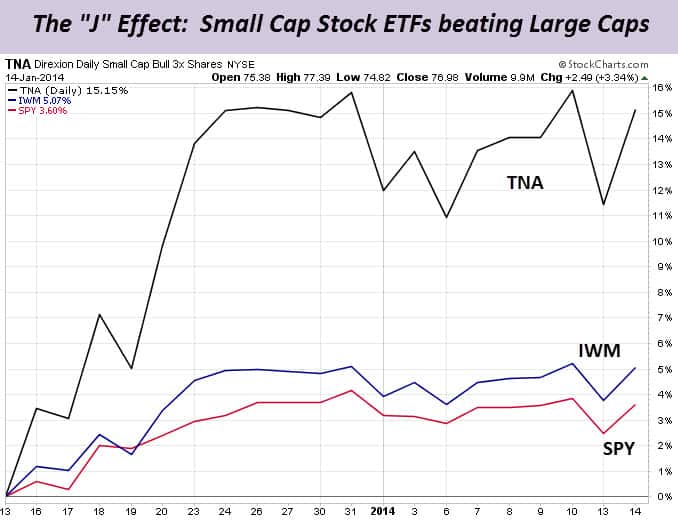 Behavioral finance is largely behind the January Effect. At the start of each new year, institutional investors who control billions of dollars add higher risk small cap stocks along with microcaps (NYSEARCA:IWC) to their portfolios in an attempt to position themselves for market beating performance. They’ve got billions of dollars under management and they don’t want to be thought of as closet indexers.

The table below shows how the January Effect has come true four out of the past five years and in 2014, it’s occurring again.

Even though market theorists like Nassim Nicholas Taleb argue that stock market patterns like the January Effect are completely random, the behavior of stock market participants to act a certain way and at a certain time is hardly a fluke. Here’s another way to think about it: We are all creatures of habit, so the stock market can be viewed, in a sense, as a mere reflection of our human selves or tendencies.

Via our 1/3 intraday trade alert, we bagged a two-week 19% gain on our IWM call options and our TNA position is ahead by around 7.4%.

It’s true that overweighting small caps vs. large caps in accord with the “January Effect” won’t always be a profitable trade, but when it does, there’s money to be made.

The ETF Profit Strategy Newsletter uses technical and fundamental analysis along with market history and common sense to keep investors on the right side of the market. 70% of our timestamped weekly ETF picks were winners in 2013.

We use cookies to ensure that we give you the best experience on our website. By continuing to browse the site, you agree to our use of cookies.Ok