With 2016 officially half over, the celebratory nature of the stock market is being masked by another telling trend: Defensive sectors are outperforming higher risk areas.

Formerly hot groups drenched with elevated risk like solar energy (NYSEARCA:TAN) and biotechnology stocks (NasdaqGS:IBB) have fallen out of favor and are down more than 20%, putting them into bear market territory.

Meanwhile, dull and defensive industry sectors like utilities (NYSEARCA:XLU) have blasted higher, gaining almost 25% year-to-date. Of course, that doesn’t include dividends, which have added another 3.27% over the past year to already delicious gains. XLU just paid a 0.41 per share dividend on June 27 to shareholders. (Industrial stocks (NYSEARCA:XLI) are another dull sector that’s outperforming vs. the S&P 500 but to a lesser degree.)

In early January 2016, ETFguide PREMIUM sent a timestamepd XLU buy alert to readers and it’s been among our top ETF trades thus far in 2016.

The chart below plots XLU (S&P 500 utilities) versus the SPDR S&P 500 ETF (NYSEARCA:SPY). As you can see, the performance advantage of ho-hum utilities continues. 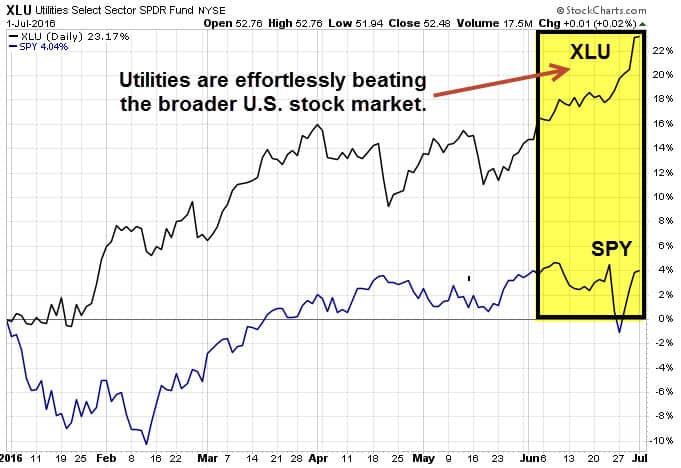 The outperformance of utilities versus the broader U.S. stock market is not a new trend. Over the past three years, XLU is ahead by 57.18% compared to a gain of 36.38% for the total U.S. stock market (NYSEARCA:SCHB).

The fact that a defensive sector like utilities is outperforming compared higher risk equity sectors along with the broader market, indicates an ongoing change in market sentiment. Risk aversion is becoming a more prominent theme. This is also playing out elsewhere. For example, the outperformance of bonds – especially long-term U.S. Treasuries (NYSEARCA:TLT) – over stocks shows how market sentiment has become more defensive.

Utilities are among the smallest S&P 500 sectors and represent less than 4% of the total S&P 500.

XLU has just over $9 billion in assets and charges annual expenses of 0.14%.