Warren Buffett is Once Again Doing the Opposite of the Crowd

The disdain for cash is nearly universal. Cash instruments like money market funds are yielding around 0%. And nobody needs or wants cash because stocks are up.

Performing even better than the broader U.S. stock market (NYSEARCA:SCHB), are industry sectors like biotech (NasdaqGIDS:IBB), energy (NYSEARCA:XLE), and REITs (NYSEARCA:VNQ) which have all gained between 13% to 21% YTD.

Mutual fund cash liquidity or the amount of money that fund managers keep in reserve hit just 3% of assets in June, according to Ned Davis Research (NDR). Not that anyone is paying attention, but that’s lower than previous market tops in 2000 and 2007. 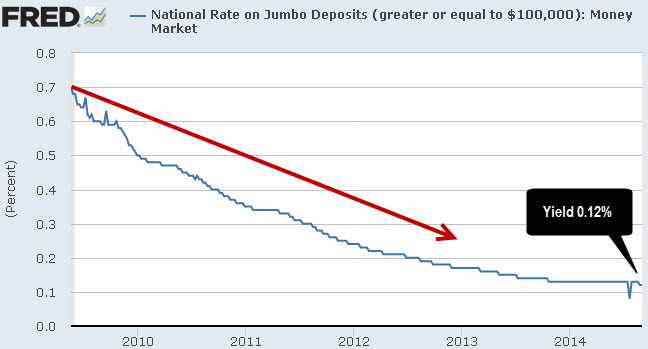 What about individual investors? Are they mimicking the same pattern?

In its July survey, the American Association of Individual Investors showed that individuals reduced cash (Nasdaq:FDRXX) in their portfolios to 15.8%, which is a 14-year low. The fully invested mind-set appears to be in full bloom.

This same behavior is confirmed by NDR data which again shows that investors’ asset mix in cash oriented mutual funds is at record lows near 18.3%, while ownership of equity (60.1%) and bond funds (21.7%) are in front.

Instead of following the crowd, billionaire Warren Buffett has been increasing his exposure to cash. The cash stockpile at Berkshire Hathaway (NYSE:BRK.B) is up more than 50% year-over-year to $55 billion.

Regardless of how poor cash looks right now as an investment, it’s still a major asset class and it serves an important purpose. In my video, “Is Cash Really Trash,” I cover the overlooked benefits of cash inside an investment portfolio and why it beats the full invested mentality.

Although Buffett is not by definition a “market timer,” the precision of his best investment payoffs (see his $5 billion deal with Goldman Sachs in 2008) has been routinely good. It’s also not coincidental that Buffett’s cash hoard has helped him to make these kinds of opportunistic moves when others are running scared.

Contrary to popular views, cash has held up during both inflationary and deflationary cycles.

Sentiment extremes like the consensus disgust toward cash are contrarian signals or warning signs.

The just released September edition of the ETF Profit Strategy Newsletter outlines key market levels and sentiment for stocks, bonds, and gold. It also contains our latest monthly income trade. Since inception in Feb. 2012, our Income Mix Portfolio has generated $25,544 or $824 per month over the past 31 months.