Will Shadow Banking Take Down China?

To China, shadow banking has been both a blessing and a curse.

It’s been a blessing, because it’s created an immediate steroids like impact on China’s economy of  falsified strength and growth.

It’s been a curse, because the art of gaming economic growth through credit expansion never has a pretty Hollywood ending.

In China, credit expansion via shadow banking is big business. How big? JPMorgan Chase estimated that up to 69% of China’s 2012 GDP alone was attributable to shadow banking.

The actual meaning and scope of shadow banking is still hotly debated in academic circles.  However, the term “shadow banking” generally refers to financial intermediaries that facilitate credit outside the regulatory boundaries of the traditional banking system.  Shadow banking organizations can include hedge funds, micro lenders, and even structured credit products.

Because shadow institutions avoid the regulations that guide depository banks, they aren’t required to keep high capital reserves relative to their market exposure.  This lack of regulation, as in China’s case, encourages overleverage, which in turn can results in catastrophic losses when credit markets freeze up. 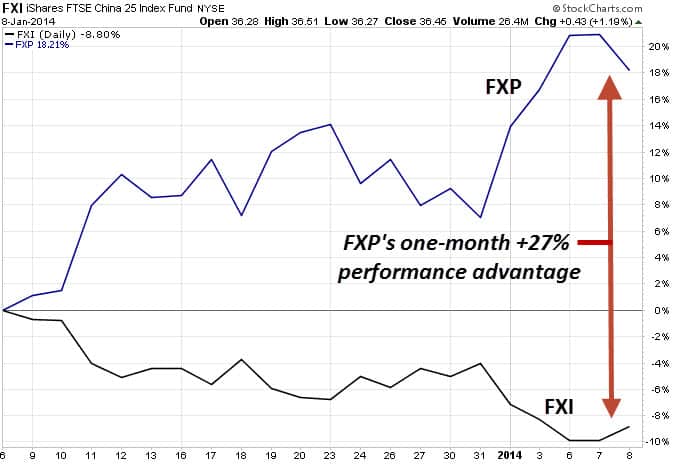 The danger of rapid credit growth by unregulated institutions (or “shadow bankers”) was iterated a long time ago by famed economist Friedrich Hayek, who wrote in 1935:

“There can be no doubt that besides the regular types of the circulating medium, such as coin, notes and bank deposits, which are generally recognized to be money or currency, and the quantity of which is regulated by some central authority or can at least be imagined to be so regulated, there exist still other forms of media of exchange which occasionally or permanently do the service of money. The characteristic peculiarity of these forms of credit is that they spring up without being subject to any central control, but once they have come into existence their convertibility into other forms of money must be possible if a collapse of credit is to be avoided.”

Rather than buying into the propaganda du jour that China’s unfolding credit bubble will fix itself, via our Weekly ETF Picks from Dec. 5, 2013 we wrote:

“While we respect the rally Chinese stocks have enjoyed, we’re nonetheless suspicious about the sustainability of the run. Aside from huge systematic risks, the Federal Reserve’s eventual scale back of QE is a threat to rising asset prices.  We’re buying ProShares UltraShort FTSE China ETF (NYSEARCA:FXP) at $14.65.”

Since our Dec. 5 trading alert, FXP has jumped around 17% and the chart above shows the whopping relative performance difference of  FXP versus the iShares Large Cap China ETF (FXI).  Meanwhile, the Shanghai Shenzhen CSI 300 index  has been clobbered and Asian stock market volatility is surging.

Chinese ETFs like the iShares Large Cap China ETF (NYSEARCA:FXI) and the SPDR S&P China ETF (NYSEARCA:GXC) have followed the CSI 300’s downtrend by crumbling between 6% to 9% since early December. Will the latest stock market sell-off escalate into China’s Lehman Bros. moment? Stay tuned, because the groundwork for more chaos has been laid.

The ETF Profit Strategy Newsletter uses technical, fundamental, and sentiment analysis along with market history and common sense to keep investors on the right side of the market.  In 2013, 70% of our weekly ETF picks were winners and our biggest gainer was a 525% profit.

We use cookies to ensure that we give you the best experience on our website. By continuing to browse the site, you agree to our use of cookies.Ok