Does the Sleeping Giant (VIX) Have More Upside?

Like a sleeping giant, stock market volatility can hibernate, but it never goes away. Right now, the giant is showing signs of awakening and whether the beast completely tramples the city is yet to be determined.

Although the S&P 500 (^GSPC) hit all-time highs near 1,859 last week, a number of flashing indicators we’ve written about are showing the stock market’s bullish velocity is waning. And other gauges, like the VIX (ChicagoOptions:^VIX), have been downright bearishly skeptical.

Interestingly, the S&P’s all-time peak was not matched with a corresponding 52-week low in the VIX. After a 14% surge yesterday, the VIX still trades around 30% above its yearly low of 11.05. Call it skittish or whatever else you want, it plainly appears that volatility (NYSEARCA:VXX) isn’t done talking.

AUDIO: “U.S. Stocks aren’t Bothered by the Blood in Other People’s Streets…”

Via our Weekly ETF Picks on 2/13/14 we told readers about the specific VIX strike price and monthly expiration of a still open trade that is now +35% since our time stamped alert. We also added:

“A stock market without fear is a dangerous place to invest and from Jan.10 to Feb.3, the CBOE S&P 500 Volatility Index (VIX) soared 76% from 12 to 21.44. Considering the global state of affairs, stock market volatility is still quite understated and January’s surge shows how fast and furious the market’s mood can change.” 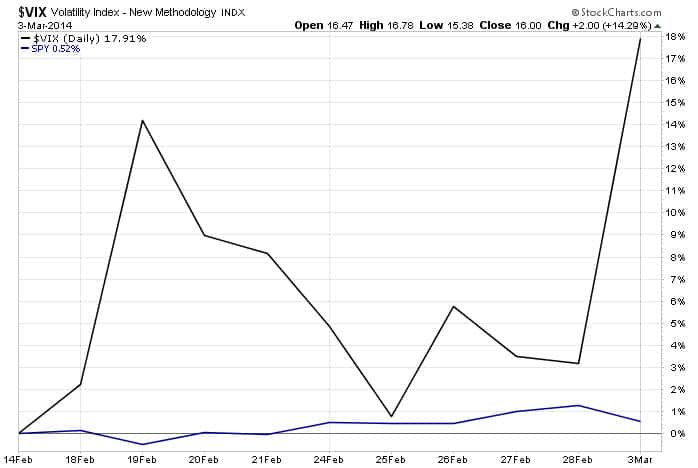 Over the past year, the VIX has closed above 20 just four separate times. By contrast, the VIX managed that feat 45 times in 2012 and on 135 occasions in 2011. Furthermore, the VIX topped out at 89.53 during the 2008 credit crisis, which illustrates the type of upside for when the next shock arrives.

The VIX (NYSEARCA:VIXY) and S&P 500 (NYSEARCA:VOO) move in opposite directions around 80% of the time.