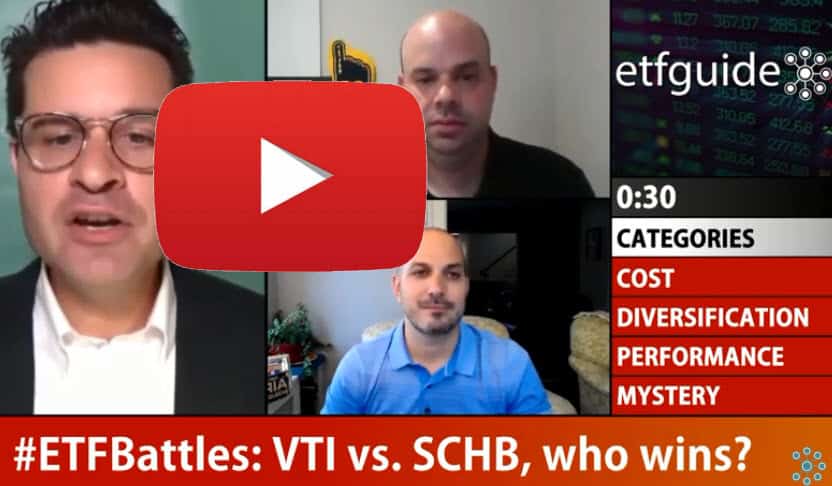 ETF Battles Doubleheader: VTI vs. SCHB vs. ONEQ – Who Wins?

This is an excerpt of a ETF Battles doubleheader between VTI vs. SCHB vs. ONEQ– it’s a broad market rumble!  Who wins the battle?

Ron: What happens when you combine too many ETFs with not enough airtime? You get doubleheaders. And that’s what’s coming up on today’s episode of “ETF Battles”. Welcome to the show, I’m Ron DeLegge.

Today’s “ETF Battles” is epic because it’s between two broad market ETFs that are among the largest and most popular in the ETF marketplace. We’ve got the Vanguard Total U.S. Stock Market ETF (VTI) versus the Schwab U.S. Broad Market ETF (SCHB). Keep in mind, that’s the first half of today’s ETF battle. The second half will involve the winner of the first battle which will advance to face the Fidelity NASDAQ Composite ETF (ONEQ).

In terms of stock funds, this showdown is like Mary Poppins versus Mary Poppins minus the umbrellas and the singing. These are two of the largest U.S. broad market ETFs by assets. They are also among the most widely held ETFs. And they come from two well-known companies which are both fierce competitors, Charles Schwab and Vanguard.

So we’re glad to have with us, Todd Rosenbluth, head of ETF and mutual fund research at CFRA and John Davi, founder and CIO at Astoria Portfolio Advisors. Judges, it’s great to see you again welcome back. So we’re gonna begin with the first battle category, each of our judges can have 30 seconds to weigh in. We’re gonna start with you, Todd. Cost, who wins the battle between VTI and SCHB?

Todd: So this to me is a split decision. Both these ETFs charge three basis points, that’s among the cheapest products around. It’s unlikely that the fees are gonna come down much lower, and that for a product that is as large and is widely held as these two. The volume is nearly the same. You have a little bit more trading volume taking place, I believe, with the Vanguard ETF, but more than sufficient both trade with tight spreads. This is a split decision. You can’t go wrong from a cost standpoint, in my opinion, from either of these two ETFs.

Ron: That’s a good start, thank you, Todd. How about you John, how do you see it?

John:
I’d give the overall total cost of ownership edge to VTI. I mean, yes manager fees is important but you really wanna look at if your trade in larger volumes, and what you see at VTI a typical trade’s about half a billion notional per day. Whereas SCHB trades about 75 million per day. So in the old days when it was commission-free, maybe you would lean on SCHB. If you’re accosted at Schwab, but now that you’re kind of commission-free, I don’t see why you’d wanna own it. I would choose the VTI, which is Vanguard to behemoth. I like the way they manage portfolios, how they do tax management, how they handle creates redeem. So my overall edge is to VTI in that category.

Ron: Alright, thank you very much. We are moving on to the next battle category which is diversification, lets stick with you John, who wins the battle?

Watch the full ETF Battles Doubleheader between VTI vs. SCHB vs. ONEQ on ETFguide TV