Did You Miss This Year’s Biggest Investment Themes? Here’s Four

Keeping track of global macroeconomic trends is a daunting task.

For that reason, each month we organize and rank the key market trends in our Mega Investment Theme Report by order of significance.

Here’s a few of this year’s biggest themes:

Commodities Get Crushed
All of the hyper-inflationary dreams of commodity bulls have been shot dead. As a group, commodities have fallen around 27% since 2011 and many individual sectors like oil (NYSEARCA:USO) are down more.  Over the past year alone, light crude oil is 31% lower. 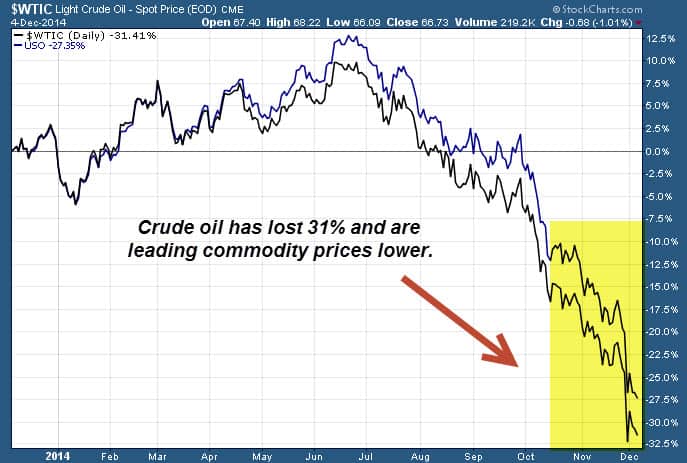 Even defensive oriented precious metals have gotten clobbered: The ETFS Precious Metals Basket (NYSEARCA:GLTR), which holds gold, silver, platinum, and palladium is down almost 29% over the past 4 years.

Healthcare Sector Blazes Ahead
The booming healthcare sector has been among this year’s biggest investment themes. S&P 500 healthcare (NYSEARCA:XLV) stocks are up 30% while biotech stocks (NasdaqGM:IBB) have jumped 39% since the start of the year. Both sectors are easily outperforming the broader U.S. stock market (NYSEARCA:VTI), which has gained 16.6% over that same time frame.

Long-Term Bonds Outperform Stocks
The yield on 10-year U.S. Treasuries (ChicagoOptions:^TNX) has shocked Wall Street by sliding 20% this year. Most analysts at the beginning of the year wrongly predicted higher yields and lower bond prices.

The “R” in BRIC Gets Slaughtered
How bad have Russian stocks been this year? The Market Vectors Russia ETF (NYSEARCA:RSX) has been slammed 35% and the worst may yet be ahead. By comparison, the BRIC group (NYSEARCA:BKF) – which Russia is part of – along with Brazil, India, and China has a modest YTD decline of just 0.20%.

Shorting Russian stocks has been one of the best bearish trades of 2014. The Direxion Daily Russia Bear 3x Shares (NYSEARCA:RUSS) has soared around 100% YTD.

Facebook
Twitter
LinkedIn
PrevPreviousDoes it Pay to Be a Contrarian Investor?
Next4 Symptoms of an Unhealthy Investment PortfolioNext