Treasury Doomsayers Get Grilled by Hated Rally in Bond Prices

In late 2013 just before the Federal Reserve began its scaling back on monthly Treasury bond purchases, the conventional wisdom was that interest rates would rise and bond prices would fall. Invariably, the consensus opinion was – at it has been since “quantitative easing” or QE began in 2008 – that “interest rates have nowhere to go but up.”

This time around, the Great Minds had finally figured out the bond market. After all, the “dumb” Fed was choreographing its every move. All 72 economists polled by Bloomberg at the start of 2014 confidently predicted that bond prices would fall and interest rates would rise. Not a single one of them expected any other outcome.

Never mind how all of these economists have been and continue to be dead wrong. Their reasoning was if the Fed is buying fewer Treasuries, it would create less demand for U.S. debt and cause bond prices to trade at lower prices. Lamentably, the supply and demand theories they learned in school failed them.

Yet, like so many times before, the logic of conventional wisdom – especially when it’s ignorant of market price trends – turned out to be a big mistake.

Although the Federal Reserve did cut its monthly QE-bond purchases to $65 billion per month in January, it had zero negative impact on prices. At the end of January alone, ETFs tied to the performance of long-term Treasury bonds like the iShares 20+ Year Treasury Bond ETF (NYSEARCA:TLT) soared almost 6% while the SDPR S&P 500 ETF (NYSEARCA:SPY), by comparison, fell 2.59%.

While doomsayers were predicting a crash in Treasury prices, we told readers to ignore the hype and to focus on the facts. Via ETFguide’s timestamped Weekly ETF Picks from March 5, we said the following:

“Although it’s still trading above its 50 and 200 day moving average, the iShares 20+ Yr Treasury ETF (TLT) has cooled off after a hot year-to-date start. We like TLT, not so much for its 3% annualized yield, but as a defensive play in the face of an overheated stock market and possible war between Russia and Ukraine. We’re buying TLT at current prices ($106.72). Even more, TLT should be the temporary beneficiary of capital outflows from unstable emerging markets, which will keep prices firm.” 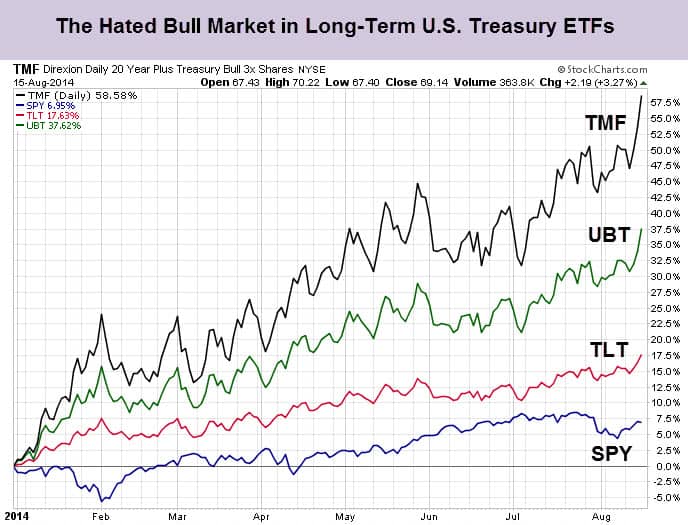 During its June FOMC meeting, U.S. policy makers agreed to cut QE even further – to $25 billion. And by October, QEternity is expected to end.

Now with 2014 more than half way over, the yield on 10-year and 30-year U.S. Treasuries has done the exact opposite of what most analysts predicted; by sliding in the vicinity of 20%. The sheer madness of what shouldn’t be happening keeps happening!

Meanwhile, traders in Treasury bond ETFs that go long with leverage have been printing money. The ProShares Ultra 20+ Yr Treasury ETF (NYSEARCA:UBT) and Direxion Daily 20+ Treasury Bull 3x Shares (NYSEARCA:TMF) are sitting on YTD gains between 37% to 58%. (See chart above) Not a bad year of performance, especially when the year isn’t even over. UBT uses 200% daily leverage while TMF uses 300%.

For Treasury doomsayers, the great collapse of unmanageable public debt will have to wait. Market prices are the boss and right now the bond market isn’t done dismantling all of the logical conclusions and conventional wisdom about what comes next.

“As investors, we also always have to be aware of our innate and very human tendency to be fighting the last war. We forget that Mr. Market is an ingenious sadist, and that he delights in torturing us in different ways,” said Barton Biggs.

The ETF Profit Strategy Newsletter contains our latest view of TLT and other Treasury ETFs – which continue to outperform both U.S. stocks and gold. Our largest year-to-date winner is a +188% timestamped gain from our Jun. 5 Weekly Picks. All our readers get email and text alerts too.