Gold vs. Silver: Is the Ratio Bullish or Bearish?

The gold/silver ratio has been on a fierce bullish run, what does it mean?

This ratio measures the relative strength of gold compared to silver and is calculated by dividing one ounce of gold’s current price by one ounce of silver’s price. The gold/silver ratio boils down to how many ounces of silver you could swap for gold.

Over the past six months, silver bullion (NYSEARCA:SLV) has slid by around 14.5% whereas gold (NYSEARCA:GLD) has fallen just 4.3%. Meanwhile, the gold/silver ratio has risen around 14% as gold outperforms silver.

Is the gold/silver ratio useful?

For one, the ratio tells us about extreme moves, especially divergences, in the price of gold versus silver. Although both metals (NYSEARCA:GLTR) have trended in the same direction 73% of the time over the past four decades, there are brief moments of decoupling. And therein lays the big opportunity. 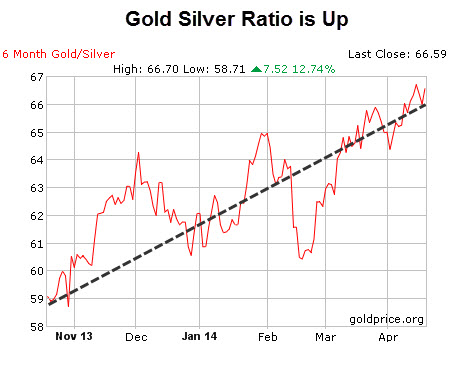 While most analysts and traders were ignoring the gold/silver ratio (COMEX:GCQ14.CMX) and consumed by bearishness, the ETF Profit Strategy Newsletter (January 2014 issue published on 12/20/13) told readers where to be:

We exited the final leg of our GLD MAR 112 calls for a 66% gain, selling the GLD contracts we bought at $640 at an average price of $1,062. And as the gold/silver ratio marched higher, we rode the wave.  Our video “Why we were bullish on gold when everyone else was bearish” examines other indicators we used.

Currently, the gold/silver ratio has risen sharply since mid-February surpassing its January highs. Yet, the price action for both gold and silver along with mining stocks (NYSEARCA:GDXJ) are trending lower. Why? Because correlations between the two metals are joined at the hip, with silver’s price swings two to three times more volatile. 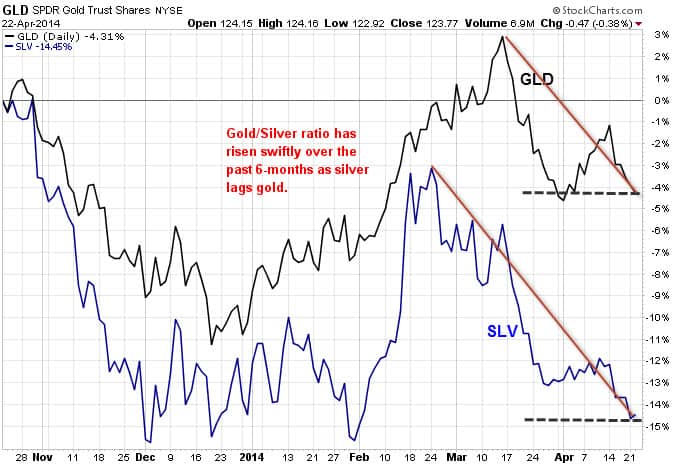 The psychology of alleged monetary “restraint” by the Federal Reserve’s scaling back on QE might influence the appetite towards owning fewer precious metals (NYSEARCA:DUST) at this moment. Put this against a backdrop of decelerating bullishness and the contrarian investor might quickly conclude that diving head first into precious metals (NYSEARCA:NUGT) is the right move.

Sometimes the right trade isn’t being long or short, but neutral. Our latest gold/silver ETF research focuses on what we think is another high profit opportunity.

PrevPreviousShould Your Portfolio Own Commodities?
NextHow Global is Your Investment Portfolio?Next