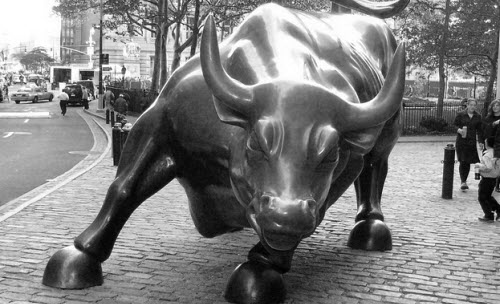 Wall Street is Still Optimistic, Should You Be Too?

Never mind the S&P 500’s (^GSPC) mild nosedive. Wall Street’s analysts are still cheerleading stocks for 2014 as if nothing has changed. How bullish are they?

One of the most bullish 2014 forecasts is Abby Joseph Cohen of Goldman Sachs who, according to Barron’s,  predicts a 16% rise in the S&P 500 this year. Her permabull twin is Jeremy Siegel, a professor at Wharton School at The University of Pennsylvania, who expects the Dow Jones Industrial Average (NYSEARCA:DIA) to top 18,000 this year.

Prudent investors should be rightly skeptical of Wall Street’s self-serving forecasts, especially when the opinions agree too much with each other as they do right now. Nobody knows how deep the current selloff in stocks will turn out to be, but that doesn’t mean you should let your investment portfolio turn into chopped liver should it escalate further.

-1x inverse ETFs like the ProShares Short S&P 500 ETF (NYSEARCA:SH) offer one way to hedge by delivering daily opposite performance to the S&P. For instance, if the S&P 500 falls 2.5%, SH is designed to increase by 2.5%. Leveraged inverse or short S&P 500 ETFs, like the Direxion Daily S&P 500 Bear 3x Shares (NYSEARCA:SPXS) aim for the same daily goal as SH, but with triple daily leverage.

Consider this: The S&P 500 (NYSEARCA:SPXL) has now recorded five straight yearly gains and nine positive yearly gains out of the past 10 years. To say that stocks are overdue for a rough stretch is an understatement. It’s never been a matter of if, but when.

Furthermore, the 105% gain over the past five years for the S&P (NYSEARCA:VOO) has occurred on the back of easy money policies (QE or quantitative easing) from the Federal Reserve. Although QE remains in place, the Fed is slowly retracting the velocity of QE by reducing the amount of monthly liquidity. This has already changed equity market’s dynamic, as bleeding emerging markets (NYSEARCA:EEM) well illustrate. Since early Dec. 2013, Chinese stocks (NYSEARCA:FXI) have been clobbered 14%, while Brazilian stocks have lost almost 15%.

In the Feb. 2014 edition of the ETF Profit Strategy Newsletter (p.3) we give detailed coverage to one particular indicator that is flashing red right now and is closely associated with every major top and subsequent crash.

ETFguide uses technical, fundamental, and sentiment analysis along with market history and common sense to keep investors on the right side of the market.  In 2013, 70% of our timestamped weekly ETF picks were profitable and a 525% gain was our biggest winner.