Why the Debt Ceiling Deadline Isn’t That Scary

On Oct. 15, the sitting U.S. Treasury Secretary Jack Lew sent his warning letter to Congress to increase the U.S. debt ceiling “or else.” Should bond investors be scared?

Here’s an excerpt from Lew’s letter to Congress:

“Based on our best and most recent information, we now estimate that extraordinary measures will be exhausted no later than Tuesday, November 3. At that point, we expect Treasury would be left with less than $30 billion to meet all of the nation’s commitments—an amount far short of net expenditures on certain days, which can be as high as $60 billion. The creditworthiness of the United States is an essential component of our strength as a nation. Protecting that strength is the sole responsibility of Congress, because only Congress can extend the nation’s borrowing authority. Moreover, as you know, increasing the debt limit does not authorize any new spending. It simply allows Treasury to pay for expenditures Congress already has approved, in full and on time.”

No matter how scary the tone of Lew’s letter might be, the bond market (NYSEARCA:AGG) isn’t worried about the possibility of a U.S. debt default. Instead of surging, the yield on 10-year U.S. Treasuries (CBOE:^TNX) sits at 2.15%  and is basically where it began 2015.

Since 1960, Congress has acted 78 separate times to permanently raise, temporarily extend, or revise the definition of the debt limit. Put another way, the odds that Congress will repeat history is a virtual slam dunk. They know it and so does the bond market.

Even the ever-moody precious metals market (NYSEARCA:GLTR) doesn’t seem fazed by another episode of debt ceiling drama. The SPDR Gold Trust (NYSEARCA:GLD) has declined almost 4% this year and is undeperforming both stocks and bonds.

The statutory debt limit according to the U.S. Treasury’s latest daily report (see table below) is currently $18.11 trillion, but who’s counting? 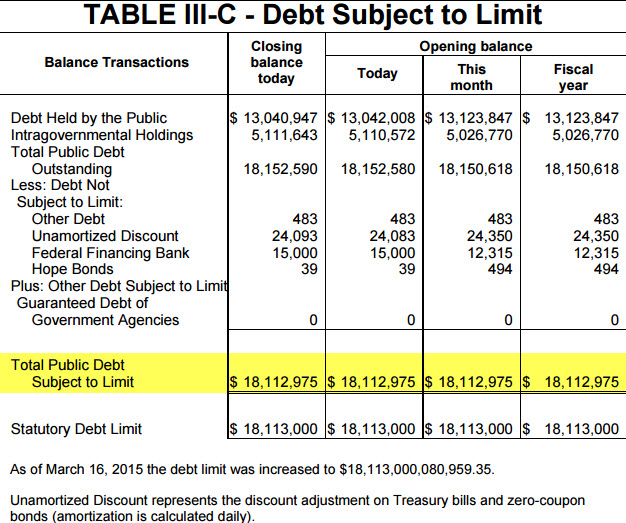