Being a Contrarian Investor Still Pays Off

Contrarian investing takes gumption. Not only are you buying assets that are hated by most investors, but you’re doing it at prices that are depressed. It’s a scary proposition for many people and because it requires such nerves of steel, most don’t do it. Add it to the checklist of reasons why contrarian investing – whether it’s done as a long-term investment or short-term trade – works marvelously.

The sector has lost value two consecutive years (2014 and 2015) and many individual stocks within the group like Cabot Oil & Gas (NYSE:COG), Kinder Morgan (NYSE:KMI), and Noble Energy (NYSEARCA:NBL) have performed worse versus energy peers over the past two years.

Most of the time, contrarian investments require time to develop and blossom because the market is slow to recognize the value of beaten up assets. But in rare instances, contrarian trades can bloom faster than expected. That’s exactly the case with the recent trend in energy stocks (NYSEARCA:XOP) and another timestamped ETFguide trade. 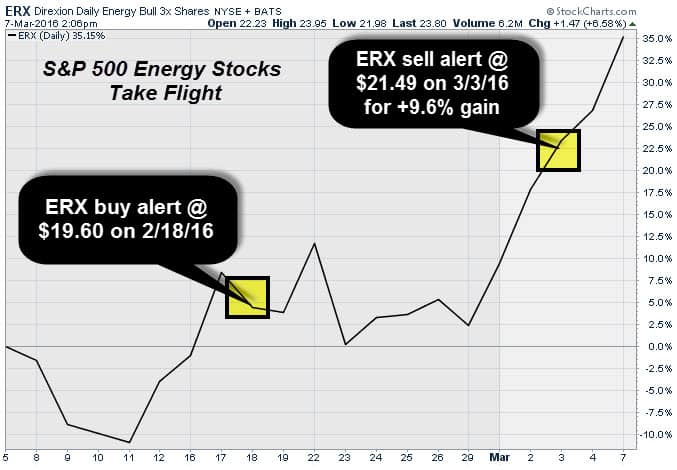 After explaining to readers the various reasons why the energy sector is an attractive candidate for contrarians, we published the following timestamped note via ETFguide’s Weekly Picks on Feb. 18, 2016:

“We’re buying the Direxion Daily Energy Bull 3x ETF (NYSERCA:ERX) at current prices near $19.30 up to a buy limit of $19.75. ERX is linked to S&P 500 energy stocks, which are now on the verge of crossing above their 50-day moving average. This would further add to the short-term bullish case for ERX. The fund aims for triple daily performance to S&P 500 energy stocks. That means if energy stocks are up 1% on any given day, ERX should be ahead by 3%.”

We ended up buying ERX at $19.60 and at one point had paper losses. Some of our best investments/trades have started out poorly and ERX was no exception. We hung on and the trade developed into a two-week +9.6% gain.

Typically, contrarian trades don’t blossom in two-weeks, but when they do, we’ll gladly take a +9.6% gain, especially when the S&P 500 (NYSEARCA:VOO) has negative year-to-date performance.

Contrarian trades, along with momentum trades, income trades, and defensive trades are the four types of tactical trades that we use at ETFguide. Each strategy has uniquely different attributes and the strategy you employ will largely depend on your temperament, goals, and the size of your non-core portfolio.  (The non-core portfolio is the only and proper context for tactical trading, whereas your core portfolio is always broadly diversified across the five major asset classes.)

In a previous post about market bottoms, we explained to readers with real life examples that buying at the absolute bottom is nice, but not necessarily a requirement for profitable results. Some of the best traders and investors don’t buy at the bottom, but still come out on top.

Now we can add ERX to our growing catalog of proof.

PrevPrevious3 Reasons Why Robo Advisors are Hazardous to Your Wealth
NextA $1.58 Million Portfolio with No CaptainNext