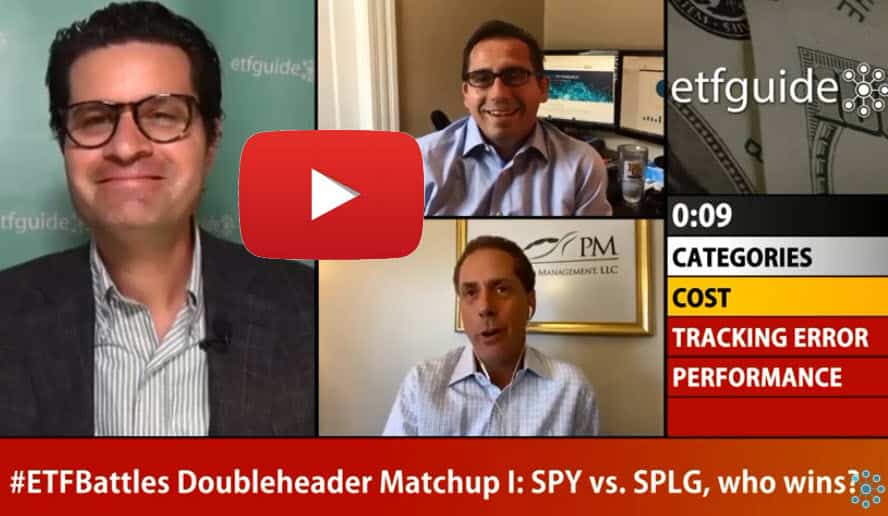 ETF Battles: A Doubleheader Bout between SPY, SPLG and URTH, Who Wins?

This is an excerpt from ETF Battles on ETFguide TV with SPY vs. SPLG and SPY vs. URTH – it’s a doubleheader brawl between these all equity ETFs.  Who wins the battle?

Ron: Well, you’ve got two choices: To invest in the S&P 500 or to invest in the S&P 500. The question is which ETF vehicle shall thy choose? Well, that’s our first matchup. It’s a battle between SPY and SPLG, which both track the same S&P 500 index from the same ETF provider, State Street Global Advisors. I get the feeling that we’re gonna have an oversupply of redundancy in this particular battle, but you asked for it because this was a viewer requested battle matchup!

The second battle for today’s doubleheaders between SPY and URTH. The latter is an, iShares all world equity, ETF. And again, like the first matchup, it was viewer requested. We’re gonna get this battle, started the first one and here to help us judge that is the illustrious Mike Akins at ETF Action. And we’ve also got with us the equally illustrious Dave Kreinces with ETF Portfolio Management. Judges, welcome to the program. It’s great to have you back!

Mike: I’m gonna give it a coin flip for the trader. It’s cheaper to go with SPY, but you got to pay a few extra basis points. For the non trader, it’s better to go with SPLG if you’re gonna hold it for a long long time, because over time, the fact that it’s an open end fund, meaning that it can do sec lending. And the fact that its six basis points cheaper will very, very slowly pay dividends.

Ron: Excellent. And so that’s a split decision?

Dave: I agree with Mike, but let’s just remember here that state street, which launched the first ETF in this SPY, ETF really ignited the ETF boom and the greatest innovation in the S&P 500 ETF landscape today, is the three times that’s in S&P 500 ETFs. So the expense ratio of both of these ETFs at, three to 10 basis points is an improvement for state street to lower the expense ratio on SPY, but the real innovation in the S&P 500 is in leverage ETFs.

Ron: So who wins this battle between SPY and SPLG?

Dave: Well, you get the lower cost as SPLG.

Ron: Okay. Excellent. So let’s move on to the next battle category, which is tracking error. Dave, you’ve got the microphone

Dave: You know on tracking error, I’m just gonna defer to Mike because he’ll give you a much answer. And we’re really gonna focus on performance, but I’ll leave tracking error to Mike,