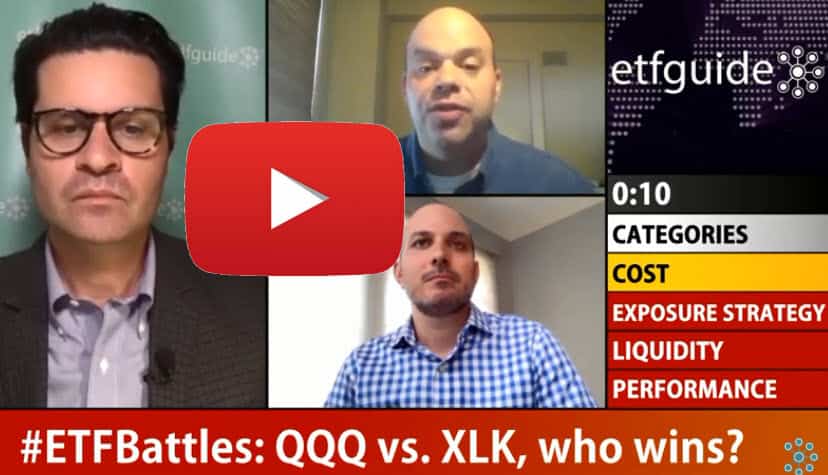 This is an excerpt from ETF Battles on ETFguide TV between QQQ vs. XLK – two of the largest technology ETFs by assets and trading volume.  Who wins the battle?

In our latest ETF Battles, Ron DeLegge at ETFguide referees a duel between the Invesco QQQ Trust (QQQ) and the Technology Select Sector SPDR ETF (XLK) with Todd Rosenbluth at CFRA Research and John Davi at Astoria Portfolio Advisors judging the battle. Just one ETF can win this battle and each fund is pitted against the other in four battle categories.

Ron: What happens when two-multi billion dollar technology ETFs bump into each other in a dark alley? Well only one thing can happen and it’s called ETF Battles! And in this episode, we’re gonna take a look at Invesco QQQ ETF, versus the Technology Select Sector SPDR Fund, as ticker symbol XLK. They’re gonna duke it out. And today’s matchup between QQQ and XLK is like Led Zeppelin versus the Rolling Stones. It’s hit, after hit, after hit. And while neither ETF is of British origin, at least not that I know of, both are venerable, and they can both sing. Nevertheless, there can only be one winner.

Here to help us to judge this battle, this matchup between these two tech heavyweights is Todd Rosenbluth, Head of ETF and mutual fund research at CFRA, and John Davi, Founder and CIO at Astoria Portfolio Advisors. Gentlemen, welcome to the program. Great to have you with us.

John: Good to be here.

Ron: So enough with my bantering. It’s time to get this battle between QQQ and XLK started. We’re gonna go through these four battle categories one at a time. Each of you is gonna pick QQQ or XLK as the winner in each of these respective categories. And you’ll have 30 seconds to do that. Let’s start with the first battle category, cost. Who wins the battle between QQQ and XLK? Let’s start with Todd, you’ve got 30 seconds, go!

Todd: Yeah, hands down XLK is the cheaper of the two ETFS. 13 basis points versus 20 basis points for the triple Q’s. They both trade with penny bid-ask spreads quite regularly. They both trade in-line within that ax of value. Those are three metrics we at CFRA are focused on. You’ve got competition from Vanguard and Fidelity putting pressure on Seed Street to continue to bring pricing down 13 basis points and it’s likely to be lower. There’s nothing like the triple Q’s and that’s why it is much higher in price.

John: I would agree with everything that Todd says. I mean, XLK is you know, is cheaper in terms of management fees I would say that just from a liquidity standpoint QQQ is a more institutional product you know, big hedge funds trade it. If you try and play like an event or try to play like an earnings release. QQQ’s trades about 60 million shares a day, XLK about 20 million in the secondary market. Obviously there’s a primary market– If you’re looking to do big size as well, for the XLK. But I’ll say that the Q’s a little bit more liquid. I find generally speaking compared to XLK. But XLK is cheaper in terms of management fees. So I agree with Todd.

Ron: Okay let’s move to the next battle category, which is exposure strategy. And of course each ETF has its own little particulars. Let’s stick with you John, who wins this particular battle category?

Watch the full episode of ETF Battles on ETFguide TV between QQQ vs. XLK to see who wins.